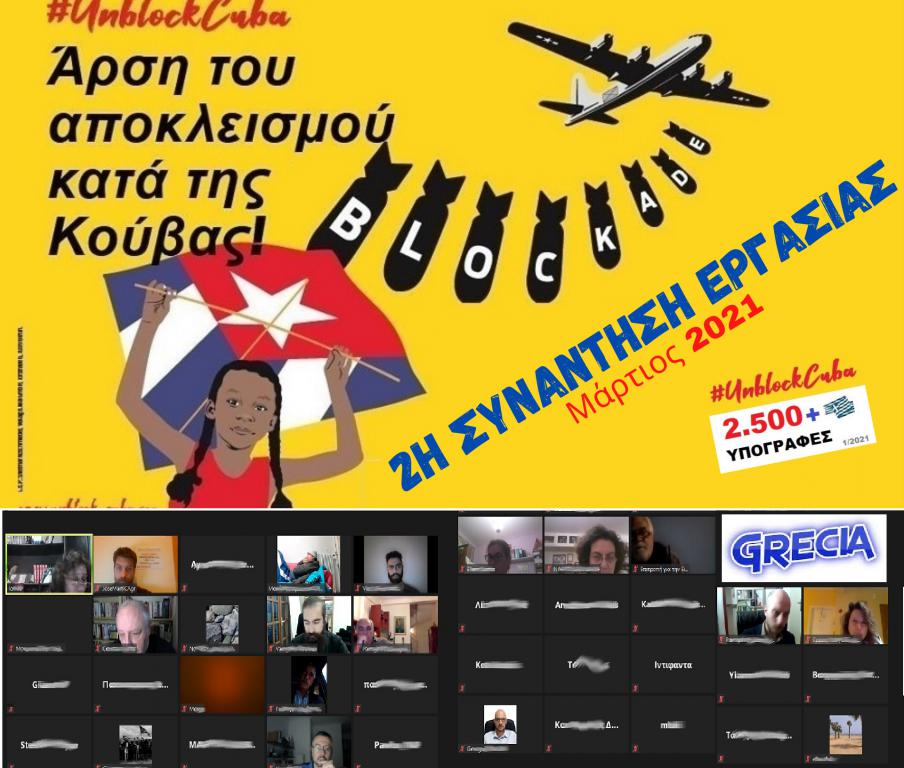 Athens, April 2. At the end of March, the second working meeting of the groups promoting the UnBlockCuba campaign in Greece on the lifting of the unjust and genocidal US blockade against Cuba, imposed for more than 60 years, took place virtually.
The campaign takes place throughout the pandemic and has recorded significant activity on social networks with the dissemination of messages, photos, videos, by dozens of friends from Cuba and personalities from Greek civil society.
At the same time, the Greek campaign for the Nobel Peace Prize was developed for the Cuban medical brigade “Henry Reeve”, which has the acceptance and support of an important part of Greek society.
Since the first meeting of the work in the context of the #UnBlockCuba GR campaign, many solidarity events with Cuba have been carried out, including two important digital events, attended by more than 2,000 Greek friends from Cuba. In addition, more than 2,500 signatures have been collected to end the blockade against the island and they are collecting more.
The second working meeting was attended by almost 40 friends of Cuba, representatives of political and social organizations, anti-imperialist groups in solidarity with various countries such as Venezuela, Crimea, Palestine and Syria. In addition, academics, lawyers, former ministers, parliamentarians, municipal and regional deputies, journalists from various media and alternative stations, trade unionists, workers, students and groups from different neighborhoods, both in the capital and in the province (Northern Greece) participated, Central Greece, Peloponnese and Crete). All participants expressed their willingness and support for the need to strengthen solidarity and the fight against the blockade.
The meeting concluded with a program of actions aimed at intensifying the collection of signatures, the publication of a poster “UnBlockCuba GR” signed by all the groups that are participating and will participate in the campaign, the creation of a rapid information network and the proposal of resolutions against the blockade of boards of directors of social organizations and municipal councils. At the communicational level, we will reinforce the work in social networks and we will try to integrate more media into the campaign. At the cultural level, we will organize artistic events (live or online), book presentations, digital projection of plays and films, etc.
The campaign will culminate with a central event when Cuba’s Annual Resolution on the need to end the blockade is presented at the UN and its main objective is to concentrate all actions and create a much wider and unifying network of solidarity with Cuba in Greece. .
The UnBlockCuba GR campaign is being developed in Greece in the midst of a pandemic and in a context of restrictive measures of almost total closure. Since the beginning of the pandemic, the Hellenic country with a population of 11 million has registered around 270,000 positive cases and more than 8,160 deaths.
Note from the José Martí Cultural Association of solidarity with Cuba