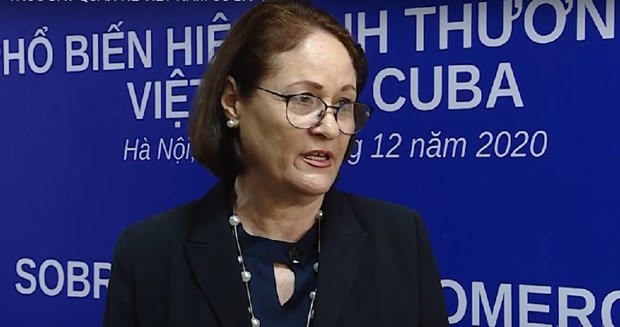 (VOVWORLD) – Chargé d’Affaires of the Cuban Embassy in Vietnam Irmina Perojo has stressed that under the leadership of the Communist Party of Vietnam (CPV), Vietnam reaped a great deal of successes during 35 years of renewal.

In an interview recently granted to the Vietnam News Agency (VNA), Perojo attributed Vietnam’s successful control of COVID-19 to the brainpower of the Party, drastic actions of authorities at all levels to protect people’s health, proper measures promptly adopted by the Government for each period, collaboration between the State and ministries and agencies, as well as coordination of the entire society in the fight against the pandemic.

She said Vietnam also offered medical supplies and financial aid to over 50 countries and international organisations, including developed nations. She also spoke highly of the efficiency of COVID-19 testing kits manufactured by Vietnam.

According to her, Vietnam’s capacity was also demonstrated in the design of mobile phone apps to make it easier to trace down COVID-19 infection and high-risk cases, as well as collect public health information on a large scale.

She added that Vietnam’s successes was also highlighted on the mass media in the US, Russia and Germany. Public opinion polls showed the high public trust n the Vietnamese Government. Many foreign organisations and world leaders congratulated Vietnam on its achievements in the fight.

With the dual goal of combating the pandemic and restoring the economy, Vietnam closed the year 2020 with an economic growth rate of 2.91 percent – listed among the countries with highest growth rate worldwide, and a trade surplus of over 19 trillion USD, she said.

Under the CPV’s leadership, Vietnam also stepped up economic integration and fulfilled its role in promoting peace and multilateralisation of ties worldwide. The year 2020 was also a success in the country’s foreign policy in its capacity as a non-permanent member of the United Nations Security Council and the ASEAN Chair.

She expressed her belief that the CPV will lead the country towards new successes in the future.

She spoke highly of preparations for the upcoming 13th National Party Congress from the grassroots level, including documents to be submitted to the event.

She said it is an undeniable success that Vietnam could gather a large-scale Congress with over 1,500 delegates taking part amid complicated developments of the pandemic worldwide at present. Diplomats and representatives from international organisations in Vietnam will be honoured to witness this important political event and are satisfied about living in one of the most successful countries in the fight against COVID-19.

She also highlighted the CPV’s determination in promoting the fourth Industrial Revolution and e-Government, adopting technological advances to make the country strong in information technology in the region in the future.

On the occasion, Perojo also wished that the 13th National Party Congress will be a success and sent New Year wishes to the Vietnamese people.

Cuban Ambassador participates in GRULAC meeting with the Indian Minister of...