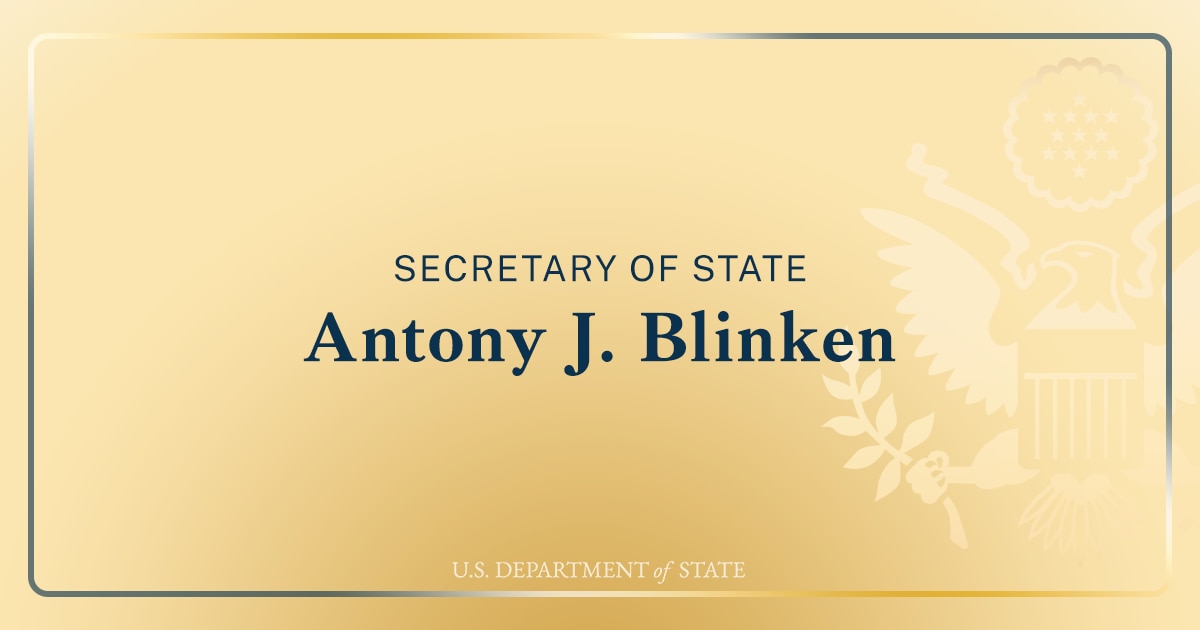 FOREIGN SECRETARY CLEVERLY:  Thank you, Tony.  It is a – it’s a real privilege to be able to work with you directly in my new role, and firstly can I say a huge thank you to President Biden and to the people of the United States of America for the incredibly kind words that have been expressed to us in response to the loss of Her Majesty Queen Elizabeth II.  It means a huge amount to all of us.
Of course, virtually the entire world was riveted in recent days watching the extraordinary services for Her Majesty Queen Elizabeth.  It was I think to so many of us incredibly moving, incredibly powerful, and I know how much President Biden and the First Lady appreciated the opportunity to be there to pay respects.
This afternoon, we have a lot to talk about, not just Russia and Ukraine but so many other challenges that bring us together as always.  And from my perspective, from the perspective of the United States and President Biden, having the UK as our partner of first resort is a tremendous comfort in these turbulent times.
Let me be very clear.  If these referenda proceed, and if Russia purports to annex Ukrainian territory, the United States will never, never recognize it.  And here this week at the United Nations it would be important for other countries – anyone who supports and purports to defend the UN Charter – to make that clear as well.
Having said that, it’s also fitting that I’m here with the foreign secretary.  We’ve been able to work together over the past year and change in his previous capacity, but I am thrilled to have James Cleverly as my new colleague because our two countries are working together, more closely together than anyone, on virtually every issue of concern around the world, to our people and to many of the countries here this week at the United Nations.
And I’d also say none of this – the sham referenda, the potential mobilization of additional forces – is a sign of strength.  On the contrary, it’s a sign of weakness.  It’s the sign of Russian failure.
At the same time, we’re seeing reports that President Putin is contemplating mobilizing more of Russia’s reserves, throwing more young Russians into his desperate quest to seize another country.  That both of these things are happening this week as we’re at the United Nations shows his utter contempt and disdain for the United Nations, for the General Assembly, for the United Nations Charter.  The very principles that we’re here to uphold this week in the charter – sovereignty, independence, territorial integrity – are what are being violently aggressed by Russia, including through the attempts to proceed with these referenda and putting even more forces into the effort to seize Ukrainian sovereign territory.
James.
You’re right, today we see reports of further aggressive action by Russia.  And I remember the last time I was here in New York at the United Nations with you in February, the United States of America and the United Kingdom stood shoulder to shoulder in highlighting what we knew to be the imminent aggressive actions of Russia.  And not everyone believed us at the time, and nevertheless those tanks crossed the border.  So I would implore all of those people listening to reports that you’ve just discussed to remember that the aggressive actions of Vladimir Putin against the people of Ukraine have got to be called out.  We have got to highlight the deep injustice of what he’s doing and we have to remain resolute in support of the Ukrainians as they defend their homeland.
We’ve seen reports that Russia is now considering proceeding with the sham referenda in Ukraine – something we said that they were going to do for many months, having put – installed puppet representatives in the parts of Ukraine that they’ve seized, and now looking to proceed referenda that would be a sham and that would then lead to them claiming the annexation of Ukrainian territory.
I think it’s also not a surprise that this is happening now.  We’ve seen in the last weeks significant gains by Ukraine in taking back the land, its land, seized by Russian forces since the aggression began February 24th.  It’s also a time when Russia itself is seeing serious reverses on the battlefield and even some of its closest partners are clearly raising their deep concerns about what Russia is doing and the consequences this is having for countries around the world.
SECRETARY BLINKEN:  Well, good afternoon, everyone.  It’s a great pleasure to be with the foreign secretary.  But before I talk about our meeting, let me say a few words about some of the reports that we’ve seen coming out of Ukraine and Russia today.
The UK is very proud of the work that we have done supporting Ukraine.  And indeed, the United States of America has been an unbelievably important friend and ally to the Ukrainians defending their homeland.  It is a genuine pleasure to be able to work with you directly, and I look forward to discussing, of course, the situation in Ukraine, the situation of global food insecurity – which I know the United States is very much taking a lead on – and of course our incredibly important bilateral relationship, one of which we are very, very proud and one that I am determined to continue reinforcing.