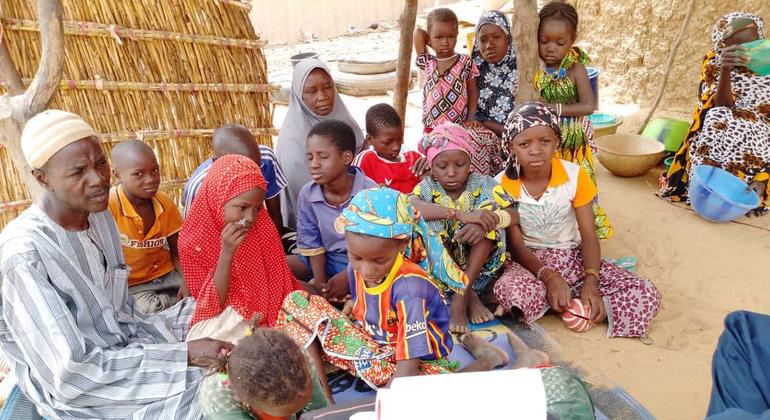 He noted that the town of Dori has grown threefold and is now home to almost 76,000 displaced Burkinabe, as well as some 20,000 refugees from Mali.

Many others have been taken in by host and displaced families already in Dori, while others have found space in refugee reception and transit centres.
But non-State armed groups have attacked water supplies and infrastructure in the country, including a recent attack on the main water supply to Dori, and WASH needs could rise rapidly, UNHCR warned.
Burkina Faso’s displacement crisis is one of the world’s fastest growing humanitarian emergencies.
Other countries in the Sahel – Chad, Mali and Niger – also face a combination of violence, poverty and the effects of climate change. More than 2.5 million people have fled their homes in the Sahel region over the past decade.

More Burkinabe are expected to arrive in Dori in the coming days, while some 15,500 have sought shelter across the border in Niger’s Tillabéri region, where resources are already scant.
The number of internally displaced people reached 1.9 million at the end of April, UNHCR said, citing government figures.

To help those families sleeping rough, UN humanitarians have helped regional authorities to relocate them to three existing displacement sites in Dori. Additional plots have been identified to host potential future arrivals, too.
According to an alert from the UN refugee agency, UNHCR, almost 16,000 mostly women and children, have been displaced to Dori, after gunmen killed at least 79 people in the town of Seytenga, which is close to the border with Niger.
With the Burkinabe authorities, UNHCR and partners have offered help to meet the most urgent needs. These include providing shelter and essential items, as well as water, sanitation and hygiene services (WASH) and psychosocial support.
“The new arrivals in Dori gave accounts of armed men going door-to-door to seek out and kill adult males, meaning that many witnessed the deaths of their husbands or fathers,” said UNHCR spokesperson Matthew Saltmarsh. “Almost two-thirds of those who fled Seytenga are under 18.”

Today, hundreds of people who fled the attackers have no option but to sleep rough on the roadside until shelter is found, the UNHCR official told journalists in Geneva.
Although efforts have been made to provide State education and healthcare to the new arrivals, the UN agency warned that competition for resources – water and land for pasture and agriculture, plus rising inflation and fuel shortages – “are all testing peaceful coexistence between different communities”.
“UNHCR and partners are preparing to bolster supplies of emergency shelters and core relief items, including sleeping mats, soap and cooking utensils, for more than 1,000 families,” Mr. Saltmarsh explained.
To date, the 1 million humanitarian appeal for Burkina Faso is only 15 per cent funded.