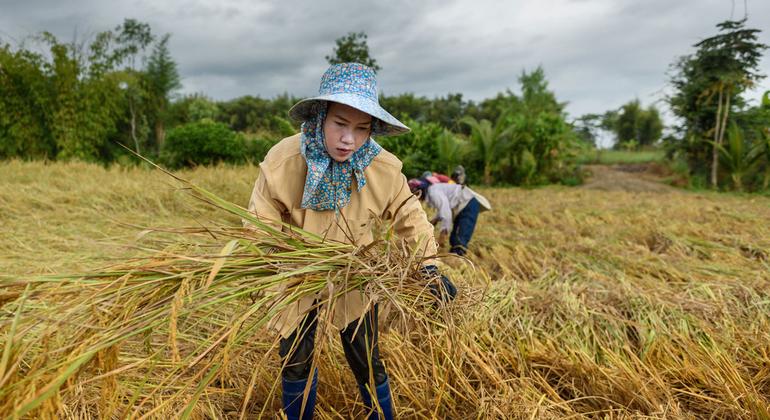 “Frankly, we were already falling short of meeting our food-security targets, prior to 2020. However, the situation is now critical,” said Mr. Shahid.  Mr. Shahid convened the high-level special event alongside the Committee on World Food Security, and the UN Secretary General’s Global Crisis Response Group on Food, Energy and Finance.

Countries must also transform food systems at every level, in order to put affordable, healthy and sustainable diets within reach of everyone, everywhere.
Factors including the COVID-19 pandemic, climate change and ongoing conflicts resulted in nearly a billion people going hungry last year, he said.
Mr. Shahid also highlighted the need to prioritize food security in the world’s least developed countries, landlocked developing nations, and small island developing states, whose citizens “are typically forced to spend a larger share of their income on basic necessities, including food, and are thus disproportionately affected by rising food prices.”
He also called for tackling the finance crisis in the developing world, and urgently unlocking resources to enhance social protection and support smallholder farmers to increase productivity and self-reliance.

Food systems must be able to provide affordable healthy diets that are sustainable and inclusive. They must also become a powerful driving force towards ending hunger, food insecurity and malnutrition.
Mr. Shahid said as countries implement more sustainable and environmentally responsible food-practices, they must also approach food security as part of a broader multilateral agenda that both recognizes the interconnectedness of today’s challenges, and the futility of trying to solve them unilaterally or in isolation.
“We face a real risk of multiple famines this year.  And next year could be even worse.   But we can avoid this catastrophe if we act now,” said Mr. Guterres.
Meanwhile, the World Bank has warned that the conflict in Ukraine will plunge an additional 95 million people into extreme poverty, and 50 million into severe hunger, this year.
“Solving food security also requires us to stop conflicts and pandemics that disrupt supply chains; to repair our relationship with nature, and secure sustainable agriculture; and to strengthen the global institutions working to alleviate poverty and hunger.”

In a video message to the meeting, UN chief António Guterres commended the partners for joining forces at what he called “this critical moment”, noting that the number of people who are severely food insecure has doubled in the last two years.
“Among the actions that we must immediately take include scaling up climate resilience across food systems, strengthening food environments and changing consumer behaviour to promote dietary patterns with positive impacts on human health and the environment,” he said.
These countries also must receive help in achieving sustainable transformation of their food systems, in line with recommendations from the UN Food Systems Summit held last year.
He stressed that despite this bleak picture, countries cannot lose hope.  They must collectively mobilize to alleviate global hunger and malnutrition, and also address the factors that cause them.
“The shocks of multiple global crises have weakened our institutions, our economies, and challenged our ability to effectively respond.”
The Secretary-General underscored the need to immediately reintegrate Ukraine’s food production, and Russia’s food and fertilizer, into world markets, and keeping global trade open.