“We have so far documented, from January to the end of June, 934 killings, 684 injuries and 680 kidnappings across the capital. Over a five-day period, from 8-12 July, at least 234 more people were killed or injured in gang-related violence in the Cité Soleil area of the city.”The alert comes just hours after UN humanitarians said they were ready to provide all the assistance they could to communities caught in the crossfire of gang violence, once they can gain safe access to those impacted.

A recent upsurge in fighting between rival gangs in the Cité Soleil neighbourhood of the capital, has led to the deaths of 99 people with 135 injured according to data reported by the UN humanitarian affairs coordination office (OCHA) in Haiti.— Rosemary A. DiCarlo (@DicarloRosemary) July 15, 2022

Encouraging: The Security Council has unanimously extended @BINUH_UN for a year. I urge Haiti’s leaders to heed the Council’s call for a political process leading to inclusive, transparent elections in good time. Haitians also need immediate relief from gang violence and crime.

“The heavily armed gangs are becoming increasingly sophisticated in their actions, conducting simultaneous, coordinated and organized attacks in different areas”, said Mr. Laurence. “The right to life is the supreme right under international human rights law, and the State has a duty to protect that right, including from threats emanating from private individuals and entities.”
“As people continue to suffer in Cité Soleil, insecurity is preventing humanitarian agencies from entering the area,” said Ulrika Richardson, the UN Humanitarian Coordinator, the organization’s most senior humanitarian official in Haiti.
Jeremy Laurence, Spokesperson for OHCHR, urged the authorities in Haiti to ensure fundamental rights are protected, and “placed at the front and centre of their responses to the crisis. The fight against impunity and sexual violence, along with the strengthening of human rights monitoring and reporting, must remain a priority”, he said.
OCHA said that “a large proportion of the population are trapped in Cité Soleil as gangs attempt to exert their influence,” adding that “the people in some areas have not had access to food or water since July 8.” One child in five is suffering from severe malnutrition “a rate well above emergency thresholds.”
For months now, the desperate socioeconomic situation coupled with political gridlock, has sparked street protests, adding to the deteriorating security situation, and many residents and businesses have shuttered themselves indoors out of fear, said OHCHR.

People displaced by gang violence in Port-au-Prince, Haiti, are being supported by the UN. (file)

OHCHR welcomed the extension of BINUH’s mandate, “which will further buoy the collective international response to the human rights crisis unfolding in the country and assist with flow of humanitarian assistance.”

Cité Soleil, with a population of around 300,000 is one of the poorest neighbourhoods in the Haitian capital, where gangs have gained more influence over the past several years.

In less than one week and according to a report released by OCHA, at least 2,500 people have also been forced to flee their homes because of the fighting. Twenty people have been reported missing. Every day, with continued fighting, more people will suffer and be forced to flee, often risking their lives, the agency said in a news release on Friday. 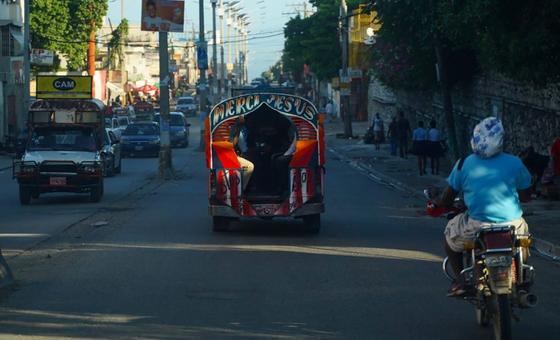 “Most of the victims were not directly involved in gangs and were directly targeted by gang elements. We have also received new reports of sexual violence.”
Some gangs are resorting to extreme tactics to control locals such as denying them access to drinking water and food. This has simply made malnutrition worse.
OHCHR is calling on gang members and those supporting the violence, to immediately cease their activities, which are impacting many of the most vulnerable citizens, living in extreme poverty.

“The UN is ready to provide assistance to the many children, women and men caught in the crossfire of gang violence as soon as humanitarian partners can gain access to the affected zones.”
On Friday night, the Security Council provided a boost to UN operations in the crisis-wracked Caribbean island nation by extending the mandate of the UN Integrated Office in Haiti, for a further year, through resolution 2645.