Visit of Vice President Fuat Oktay and Foreign Minister Mevlüt Çavuşoğlu to Lebanon to convey condolences on behalf of President Erdoğan and the Turkish nation, 8 August 2020 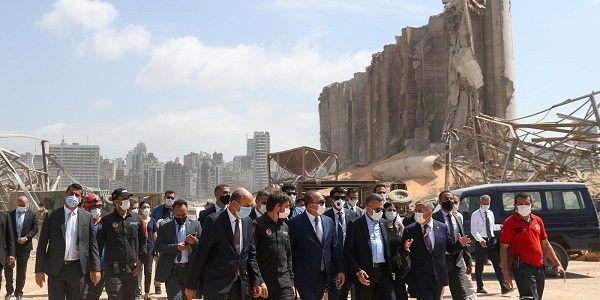 Vice President Fuat Oktay and Foreign Minister Mevlüt Çavuşoğlu visited Lebanon together on 8 August 2020, to convey condolences on behalf of President Recep Tayyip Erdoğan and the Turkish nation, and to show our solidarity with the people of Lebanon.

Vice President Oktay and Minister Çavuşoğlu were received by President Michel Aoun of Lebanon, conveyed him the condolences and swift recovery wishes of President Recep Tayyip Erdoğan and the Turkish nation and stated that Turkey would continue its efforts to heal the wounds of our Lebanese brothers and sisters.

Later that day, they also met Prime Minister Hasan Diyab of Lebanon and extended him our condolocences as well.

They emphasized that our food and medicine assistance would continue, we would support the reconstruction of Beirut and the opening of Sayda Hospital and that we proposed the use of Mersin and İskenderun Ports by Lebanon until the Beirut Port would start functioning again.

On the same day, they held a meeting with Nebih Berri, the Speaker of the Parliament of Lebanon and extended him the condolecences and speedy recovery wishes of Mustafa Şentop, Speaker of the Grand National Assembly of Turkey and also emphasized that Turkey embraced all communities of Lebanon and would continue standing by the brotherly Lebanese people.

Later that day, our delegation paid a visit to the scene of the tragic explosion that resulted in the death and injury of many people.

Our delegation stated that the victims were in our thoughts and prayers and that we were working in the field with our relevant institutions, such as the Turkish Cooperation and Coordination Agency(TİKA), the Disaster and Emergency Management Presidency(AFAD) and the Turkish Red Crescent.

Our delegation met with the families of our citizens who were injured in the explosion and conveyed their speedy recovery wishes and underlined that we followed the situation of our citizens closely.

Our delegation also met with our citizens, the Turkish community in Lebanon and the brotherly Lebanese people, thanked them for their love for Turkey and our President, and emphasized that Turkey would continue to stand by Lebanon.