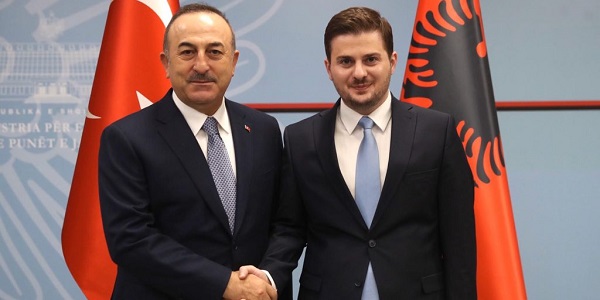 On 11 February 2020, Minister Çavuşoğlu inaugurated the Center for Balkan Studies of the University of New York Tirana of the Turkish Maarif Foundation.

On the same day, Minister Çavuşoğlu also met with our citizens and business people that make important contributions to our relations with Albania.

On 12 February 2020, Minister Çavuşoğlu met with Acting Foreign Minister Gent Cakaj.
At the meeting, our relations and regional developments were discussed.
Minister Çavuşoğlu stated that Turkey was one of the first countries to rush to help our Albanian brothers and sisters on the following day of the earthquake and that we would further improve our cooperation thanks to the agreements signed during this visit.

On the same day Minister Çavuşoğlu was received by Speaker Gramoz Ruci of the Parliament of Albania. At the meeting, developing parliamentary diplomacy and cooperation between Turkey and Albania was discussed.
Minister Çavuşoğlu stated that this year marked the centenary of the establishment of both Turkish and Albanian Parliaments.

Later that day, Minister Çavuşoğlu was received by President Ilir Meta and extended him President Erdoğan’s greetings.
At the meeting, views on issues of our agenda were exchanged.

Finally, Minister Çavuşoğlu was also received by Prime Minister Edi Rama. At the meeting, steps to be taken for further improving our economic relations particularly by establishing the High Level Cooperation Council were evaluated.
Minister Çavuşoğlu stated that Turkey was the biggest foreign investor and the 4th trade partner of Albania.