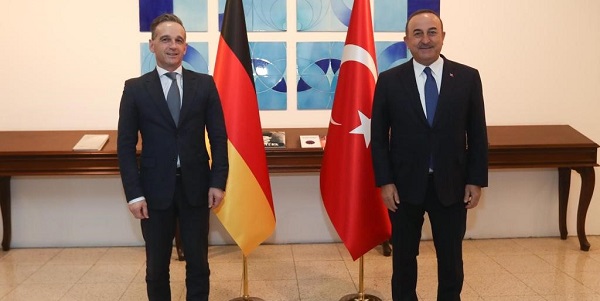 On 18 January 2021, Foreign Minister Mevlüt Çavuşoğlu held a meeting in Ankara with Heiko Maas, Minister for Foreign Affairs of the Federal Republic of Germany.

Minister Çavuşoğlu stated that trade and tourism with Germany continued despite the pandemic, that we would increase it further, that there was a positive atmosphere with the European Union (EU), but that we were expecting concrete results as well, and that visa liberalization for Turkish citizens in the Schengen area should be provided and the Turkey-EU Agreement of 18 March 2016 be updated.

Minister Çavuşoğlu also expressed that we would discuss all issues at the Exploratory Talks to be held between Turkey and Greece.

On the same day in the morning, Minister Çavuşoğlu also participated in the videoconference meeting of the Turkey’s Foreign Economic Relations Board on “Asia Anew; New Perspectives Towards Enhancing Trade Between Turkey and Asian Countries” and shared our “Asia Anew” initiative.

On the same day, Minister Çavuşoğlu also met with our newly appointed Ambassadors and wished them success in their new assignments.