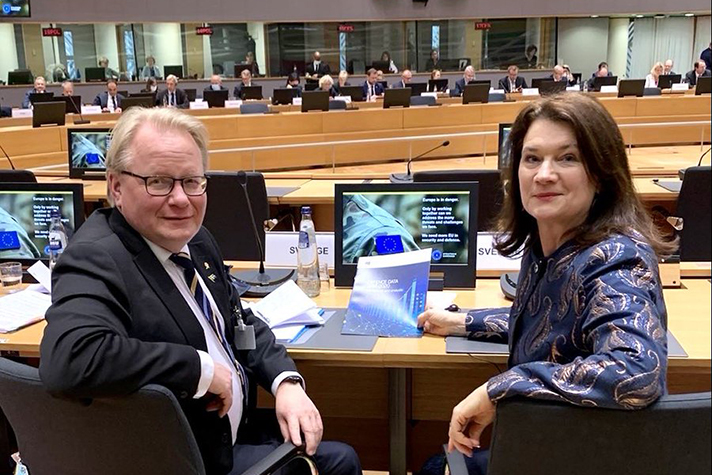 EU defence and foreign affairs ministers met in a joint session and approved the EU Strategic Compass, which is intended to provide direction and guidance for EU security and defence cooperation over the coming 5–10 years.

“The Strategic Compass strengthens EU security and defence cooperation and helps ensure that Europe can take greater responsibility for its security while also strengthening our cooperation with partners. It sets the direction for the next few years and that is important, particularly in light of Russia’s aggression against Ukraine,” says Mr Hultqvist.

The EU Strategic Compass is also expected to be discussed at the European Council meeting on 24-25 March.

The EU defence ministers devoted their meeting to Russia’s aggression against Ukraine. In connection with the meeting, an informal meeting was also held via video link with Ukrainian Minister of Defence Oleksii Reznikov.

“Sweden condemns in the strongest possible terms Russia’s unprovoked aggression against Ukraine. The Russian invasion of Ukraine is a flagrant violation of international law and the European security order,” says Mr Hultqvist.

The Minister for Defence said that the EU has acted in unity and with forceful action during the ongoing crisis, including decisions on the use of the European Peace Facility as an instrument for supplying arms to Ukraine.

Joint statement by the Foreign Ministers of Sweden and Denmark