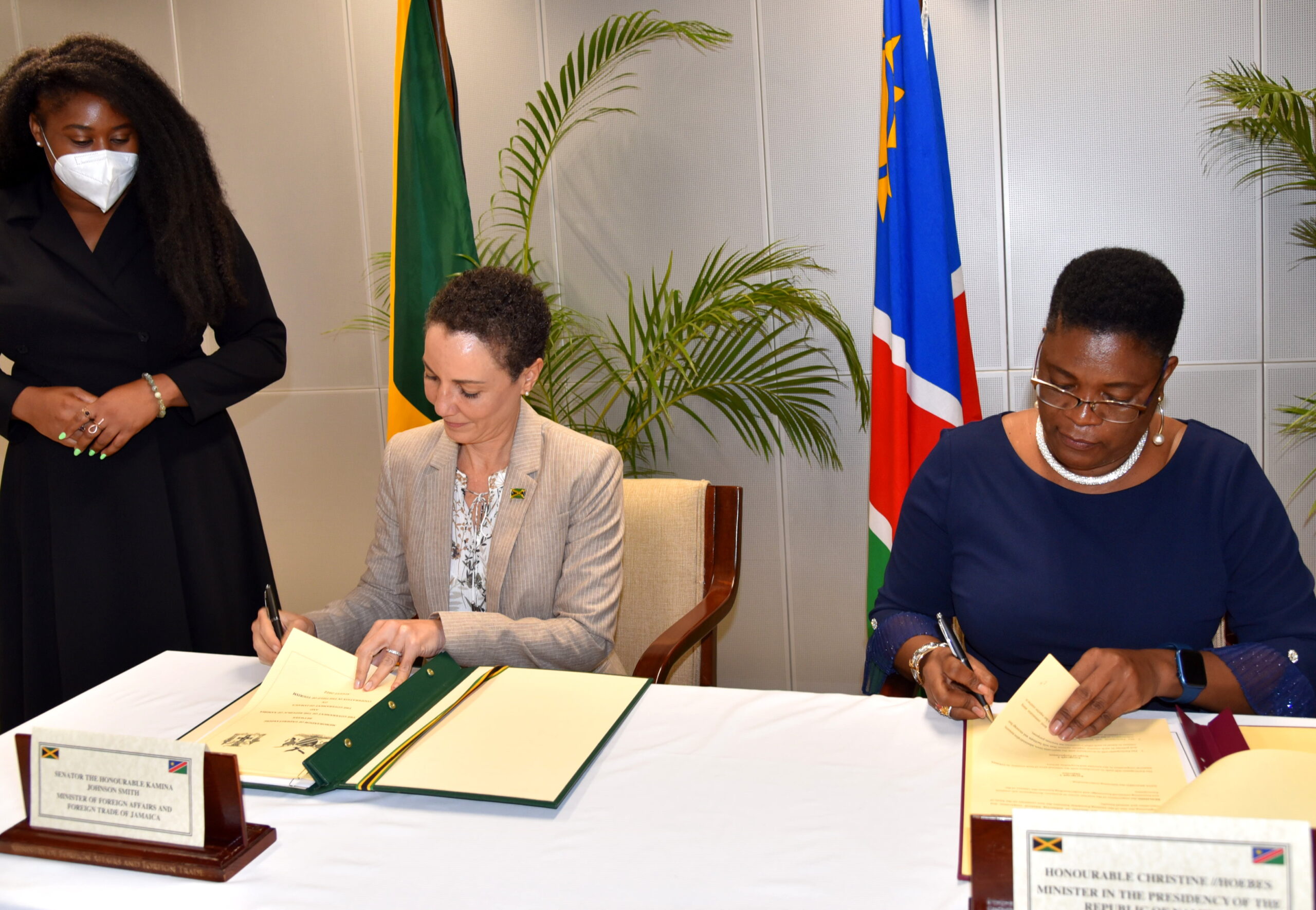 Senator the Honourable Kamina Johnson Smith has extended a warm welcome to the Namibian delegation which is currently in Jamaica to celebrate the nation’s 60th anniversary of independence.  The delegation, which is now representing the President of the Republic of Namibia, who was originally expected to be in Jamaica, is headed by the Honourable Christine Hoebes, Minister in the Presidency of Namibia, who is accompanied by the Honourable Itah Kandji-Murangi, Minister of Higher Education and their technical teams.
Caption: Senator the Honourable Kamina Johnson Smith, Minister of Foreign Affairs and Foreign Trade and the Honourable Christine Hoebes, Minister in the Presidency of Namibia signed a Memorandum of Understanding (MoU) on Cooperation in the field of Tourism on Wednesday, August 3 during the Inaugural Jamaica-Namibia Joint Committee Meeting. The signing was witnessed by Director of Tourism and International Relations in the Ministry of Tourism, Ms. Tyesha Turner.
Minister Johnson Smith cited the “shared history of promoting racial equality and harmony and Jamaica’s support of Namibia’s liberation struggles, paving the way for its independence in 1990,” as critical elements of the dynamic and vibrant Jamaica-Namibia relations. She also noted the exciting future of cooperation between the two countries, given their productive engagement.
During their visit, in furtherance of the bilateral cooperation agenda, the delegation will also engage with several MDAs including those responsible for culture, education, agriculture, logistics, oceans and maritime cooperation; and in addition will visit tertiary institutions including UWI, UTech Jamaica and CASE.
The discussions built on the framework established by the visit of Prime Minister Holness to Namibia, the first ever by a Jamaican Prime Minister in 2018 and which has led to the twinning of the capital cities of Kingston and Windhoek in 2019.
A key highlight of the visit is the inaugural Jamaica-Namibia Joint Committee, held from 2-3 August, which Senator the Honourable Kamina Johnson Smith, Minister of Foreign Affairs and Foreign Trade hails as a “significant milestone” in the diplomatic relations of the two countries, “unlocking the potential latent in the Agreement made for its establishment 27 years ago”.
The Namibian delegation will be special guests at the Joint Sitting of the Senate and House of Representatives on 5th August at George William Gordon House, to commemorate the 60th anniversary of Jamaican Independence as well as at the Grand Gala at the National Stadium on Independence Day.
(MFA&FT: August 3, 2022)
Minister Johnson Smith expressed her satisfaction with the work of the Joint Committee, saying, “The vibrant and focused deliberations over the two days have resulted in the signing of a Memorandum of Understanding on tourism as well as stronger collaboration on STEM education and higher learning; sports cooperation including in areas such as athletics and rugby; logistics and transportation; health; ocean and maritime cooperation; legal affairs; infrastructural and urban development; culture; entertainment and the creative industries.