Courtesy Call from the Chinese Ambassador to Jamaica

Minister Campbell expressed hope for increased bilateral trade between the two countries as well as enhanced cooperation in the areas of agriculture and mining.
They also spoke about diaspora related matters including the importance of the Diaspora and the recently concluded Diaspora Conference. They also had an exchange about the plans to celebrate the 60th anniversary of the establishment of diplomatic relations between Jamaica and China.
Caption: State Minister in the Ministry of Foreign Affairs and Foreign Trade, Senator the Honourable Leslie Campbell today (June 20) received a Courtesy Call from the Chinese Ambassador to Jamaica, Mr. Daojiang Chen. 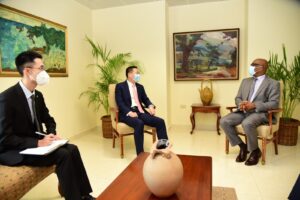 The Minister used the opportunity to thank China for their investment in several projects in Jamaica as well as for their technical assistance. 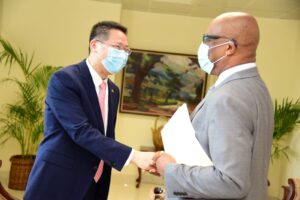