Understanding our duties key to ensuring that conflicts are minimized and rights aren’t affected, says Union Law minister on the eve of Constitution Day

Ministry of Law and Justice

Understanding our duties key to ensuring that conflicts are minimized and rights aren’t affected, says Union Law minister on the eve of Constitution Day 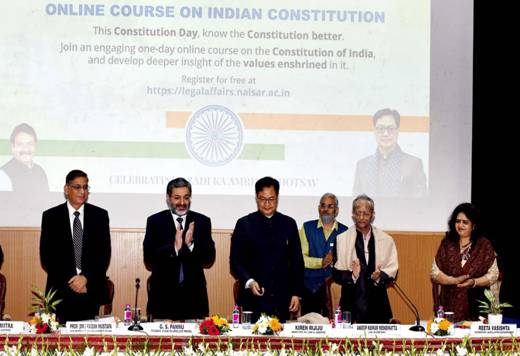 The Online Course on Indian Constitution has been launched by the Department of Legal Affairs, Ministry of Law & Justice in collaboration with National Academy of Legal Studies & Research (NALSAR), University of Law.

The launch of the online course of Indian Constitution was opened with the welcome address of the Law Secretary, Ministry of Law & Justice, Government of India. He pointed out that the importance of the day lies in the fact that in the preceding two centuries while the governance acts were imposed by the imperial power, the Constitution of India has been framed by the people of India themselves through representatives assembled in a sovereign Constituent Assembly.

Laying down the importance of the Online Course on Constitution, he said that this will be an important milestone in spreading the aspirations and ideals of the Constitution and empowers the citizens of this country by making them aware of the principles enshrined in the Constitution.

He expressed the hope that Online Course will make the people realize that Constitution is a functional manual which aids and empowers each citizen of the country than merely being a document of governance. He further underlined the objective of these initiatives as to enhance the awareness of the constitutional values to understand the fundamental rights and duties by the citizens and at the same time also reinforce our obligations towards the democratic values. It would ensure in helping the citizens familiarize with the glorious constitutional journey, the debates that took place in Constituent Assembly and also help to understand the supreme law of the land including the right to life, personal liberty and privacy issues.

He further appealed to the students to nurture the views of Mahatma Gandhi when he said “Be the change that you wish to see in the world” and further urged them to prove themselves to the growing legal challenges by rendering pro-bono public services as professed by the leaders of this country.

Addressing the eminent gathering, Shri Kiren Rijiju, Hon’ble Minister for Law & Justice, underlined the values of our freedom movement as enshrined in the Constitution, especially Fundamental Rights and the Directive Principles of State Policy, which have been the key drivers for social, economic and political justice for all. He mentioned that while being the lengthiest Constitution of the World, the Indian Constitution remains dynamic and relevant as ever, as having unique blend of rigidity and flexibility.

He highlighted the giveaway of the Constitution in terms of independent Judicial system, guaranteed rights and values of justice, liberty, equality and fraternity for the masses. He emphasized that as citizens of the world’s largest democracy, it is incumbent upon us to know the ethos and content of the Constitution so as to meaningfully lay a claim over, and actualize, the guaranteed rights in practice.

He quoted Babasaheb Dr. B. R. Ambedkar, saying “Constitution is not a mere lawyer’s document. It is a vehicle of life, and its spirit is always the spirit of age” and expressed his anguish when he hears some people say that we do not believe in the law and in the constitution, which he termed as a sad state of affairs and said that if we understand our duties truly, the rights will never be affected.

He stressed that the Constitution as a transformative document is required to be imbibed by the citizens and hence, the online course is indeed a step towards enlightening all citizens with a spirit of Constitutional morality and visions of our founding fathers. He further accentuated that the online course, with the teachings of the Constitution shall play a definite role in helping citizens to become future defenders of the liberties given by this great Document.

He lauded the efforts of the Department of Legal Affairs in collaboration with NALSAR University of Law, Hyderabad in launching this important course, to spread and amplify the message of the Constitution, as we celebrate 75 years of independence.

The 5th edition of the book on Constitution in diglot form both Hindi and English was also released in the event.

The launch of online course of Indian Constitution was made in the enthusiastic presence of students, faculty and top functionaries of the leading Law universities of India as also senior officers of the Ministry of Law & Justice.

Previous articleSpeech: International Day for the Elimination of Violence against Women 2021: UK statement at the OSCE
Next articleIn Seychelles, anecdotes with Fidel.