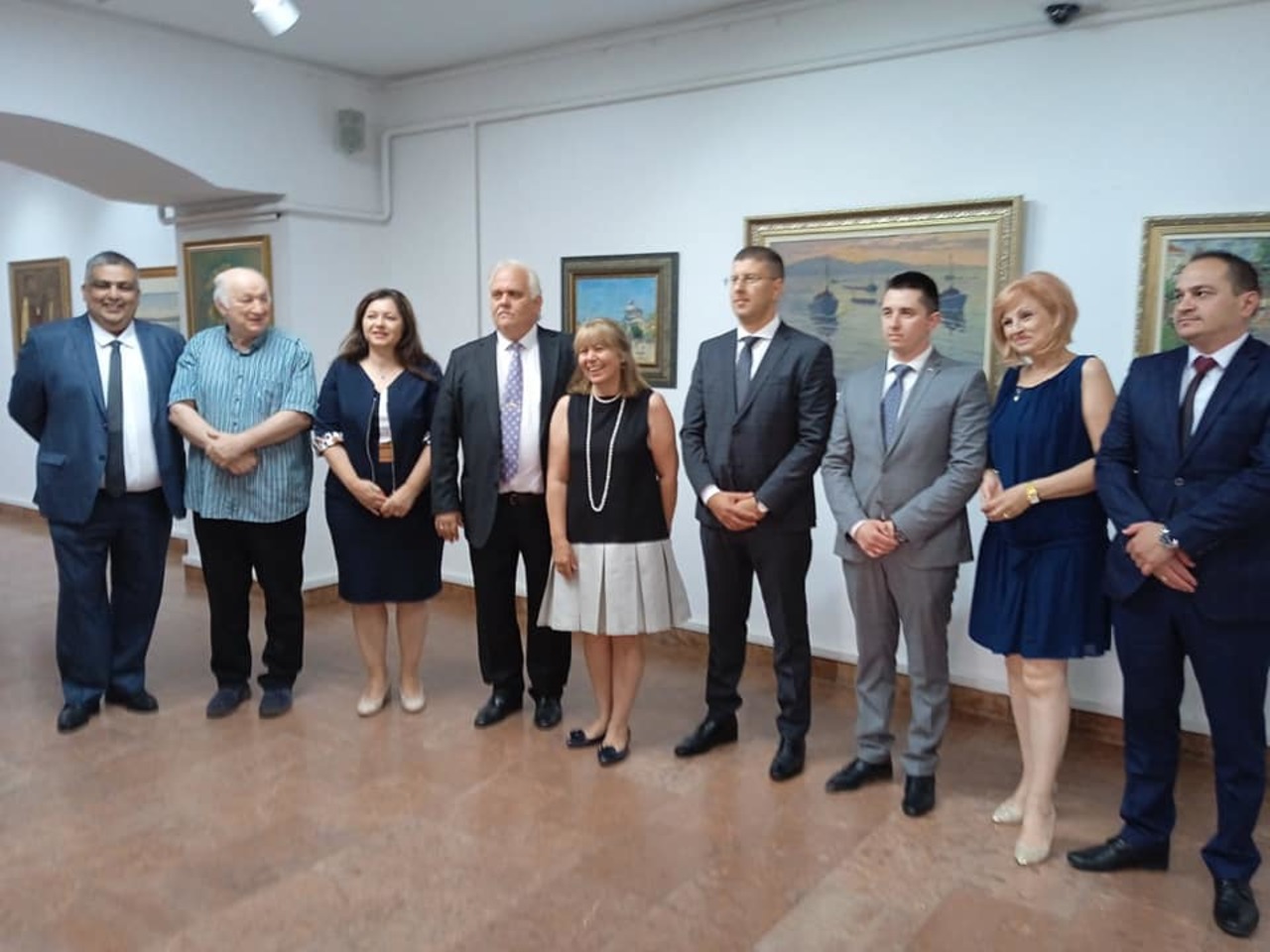 The exhibition presents artists who worked in the 40s and 50s – Konstantin Shtarkelov, Denyo Chokanov, Atanas Mihov, Zdravko Alexandrov, Vasil Stoilov, followed by those who worked in the 60s – Vladimir Manski, Vanya Decheva, Todor Dinov, Boris Nenov, Vladimir Goev. Among the artists of the 70s and 80s are Nayden Petkov, Andrey Lekarski, Georgi Bozhilov, Yordan Katsamunski, Svetlin Rusev, followed by Georgi Baev, Svilen Blazhev, Stoyan Tsanev, Veliko Marinchevski, and Ivan Milev.
Addressing the guests, Mihneta Avdić, Curator of the Museum of Literature and Theatre Arts, said that there is a long-standing cooperation with the Bulgarian Embassy in Sarajevo. She also said that she was extremely happy to have the honour of opening this exceptional exhibition of Bulgarian artists, which is part of the collection of the Ministry of Foreign Affairs of the Republic of Bulgaria. It was underlined that with the assistance of the Embassy an exhibition on the Bosnian writer Isak Samokovlija will be presented in the museum in Samokov, where his family originated.
Ambassador Valeri Yotov said in his speech that art and cultural diplomacy are a connecting bridge between peoples and countries for the development of diplomatic and political relations between them, and that diplomacy is also an art – the art of possible compromise. He pointed out that the Embassy of Bulgaria in Sarajevo pays great attention in its activities to promote and familiarize the public of Bosnia and Herzegovina through cultural events with Bulgarian history, art and contribution to European civilization, as well as with the historical and cultural closeness between the two nations.
An exhibition of works from the rich collection of the Ministry of Foreign Affairs opened in Sarajevo on Diplomatic Service Day. The exposition under the title “Diplomacy and Art” includes 22 paintings by established Bulgarian artists from the post-war period, who managed to preserve the achievements in the field of fine arts of the previous generations of artists, adding their own creative search. The project is implemented by the State Institute for Culture under the Minister of Foreign Affairs, the Bulgarian Embassy in Sarajevo, with the kind support of the Museum of Literature and Theatre Arts in Bosnia and Herzegovina and with the media partnership of the Bulgarian Telegraph Agency.
The Director of the State Institute for Culture Snezhana Yoveva shared with the guests that the exhibition “Diplomacy and Art II” is a representative project from the rich Art Fund of the Ministry of Foreign Affairs and the team of the State Institute for Culture under the Minister of Foreign Affairs selected works that show the role of art in diplomacy over the years, and that the exhibition is rich in themes, colors and style. She said that she was honoured that after the success of the exhibition in Cetinje, Montenegro, the exhibition visited Sarajevo at the invitation of the Museum of Literature and Theatre Arts and the Bulgarian Embassy in Bosnia and Herzegovina.