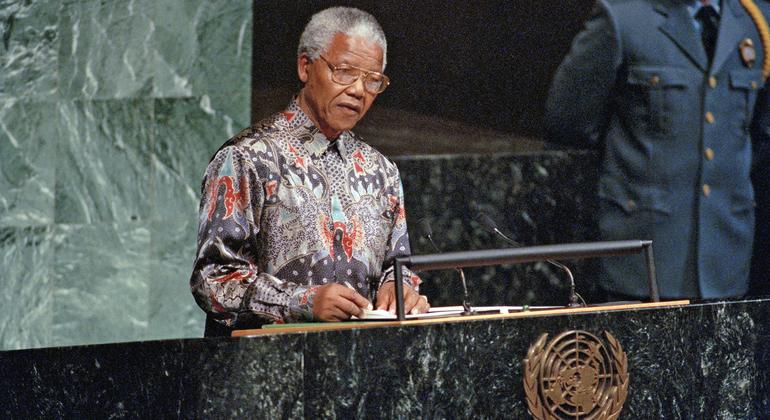 Ms. Mohammed also delivered remarks on behalf of the UN Secretary-General who, in his message for the International Day, encouraged people to honour Mr. Mandela’s legacy by speaking out against hate and standing up for human rights. The pandemic, the war, and inflation have left the continent mired in a fuel and food crisis, and a time when the Horn of Africa is enduring its longest drought in nearly half a century.

In it, Mr. Mandela is beaming, despite having endured “the very worst of humanity, vicious racism and state-sponsored brutality”, and spending 27 years in prison.
“Let’s talk with our children about what he stood for. Let’s seek out what we have in common, empower all people to reclaim our democracies, and harness the light of Mandela’s memory to illuminate the way forward,” he said.

Dr. Kouyaté, the Minister of Foreign Affairs of Guinea, is Executive Director of the Inter-African Committee on Harmful Traditional Practices (IAC). He is a leading figure in efforts on ending violence against women, including Female Genital Mutilation (FGM).
UN Deputy Secretary-General Amina Mohammed presented the Prize to the honourees. Ms. Vardinoyannis took part in the ceremony virtually, and Greece’s Ambassador to the UN, Maria Theofili, accepted the award on her behalf.
He shared that he treasures a photo of his late mother, Diana, Princess of Wales, and Mr. Mandela, which was given to him by Archbishop Desmond Tutu, the anti-apartheid leader who died in December.
Marianna Vardinoyannis and Dr. Morissanda Kouyaté are the recipients of the 2020 United Nations Nelson Rolihlahla Mandela Prize.
Citing the non-profit Freedom House, he said the world has grown less free for more than a decade and a half, and the consequences are being felt most deeply in Africa.

The Prize is awarded every five years to one man and one woman, but presentation was delayed due to the COVID-19 pandemic.
The first democratically-elected President of South Africa, and the country’s first Black leader, died in December 2013 at age 95. The annual commemoration on 18 July, his birthday, recognizes his contribution to the culture of peace and freedom.
“I have taken to heart his profound lesson that we all have the ability – and responsibility – to take action.   That there is no ‘us’ and ‘them’. We are in this together, carrying a shared responsibility to preserve our common home and stand in solidarity with one another,” she said.
“Madiba’s fight against apartheid, was in fact a fight for a better world, in which the freedom, justice and dignity of all were respected. He called for peace, social justice, equality and human understanding throughout his life,” he said.
Prince Harry listed some of the current global challenges, including the COVID-19 pandemic, climate change, the weaponization of lies and disinformation, and the “horrific” war in Ukraine, stating that “we are witnessing a global assault on democracy and freedom – the cause of Mandela’s life.”

Finding meaning in the struggle

Describing this as a “pivotal moment”, where multiple converging crises have generated endless injustices, people everywhere thus have a choice to make.
“In fact, for most of my life, it has been my lifeline, a place where I have found peace and healing time and time again,” he said.  “It’s where I’ve felt closest to my mother and sought solace after she died, and where I knew I had found a soulmate in my wife.”
He said much of his work is based on the continent “because, despite continued hardship, there are people across Africa who embody Mandela’s spirit and ideals – building on the progress he helped make possible.”

“In our own time, a time of global uncertainty and division, when it’s all too easy to look around and feel anger or despair, I’ve been inspired to go back to Mandela’s writings for insight into how this could be – how he could experience so much darkness and always manage to find the light,” he said.
Prince Harry also spoke about his special relationship with Africa, saying he has always found hope there.
Delivering the keynote address, Prince Harry, The Duke of Sussex, said the life and legacy of Mr. Mandela must be celebrated every day, particularly as younger generations may not be familiar with his leadership.

“We can grow apathetic, succumb to anger, or yield to despair, surrendering to the gravity of what we’re up against.  Or we can do what Mandela did, every single day inside that 7-by-9-foot prison cell on Robben Island – and every day outside of it, too,” said Prince Harry.
Abdulla Shahid, President of the UN General Assembly, recalled that he also advocated for democracy, gender equality, the rights of children and young people, and for protecting the environment.
Prince Harry said Mr. Mandela was still able to see the goodness in humanity, not because he was blind to the ugliness and injustices of the world, but because he knew we could overcome them.
At the ceremony, a Greek philanthropist who fights to end childhood cancer, and a Guinean senior official working to stamp out violence against women and girls in Africa, were honoured for their service to humanity.
Speaking in her own capacity, Ms. Mohammed said Mr. Mandela has served as an inspiration ever since she was a young and finding her path.

“We can find meaning and purpose in the struggle. We can wear our principles as armour. Heed the advice Mandela once gave his son, to ‘never give up the battle even in the darkest hour.’ And find hope where we have the courage to seek it.”
Ms. Vardinoyannis is founder and president of an eponymous foundation dedicated to children, and the ELPIDA Friends’ Association of Children with cancer.  She has been a Goodwill Ambassador of the UN education and cultural organization, UNESCO, since 1999.
Mr. Mandela – affectionately known as “Madiba”, his Xhosa clan name – fought against the racist apartheid system in his homeland, and for equality and freedom for all people.
Prince Harry attended the ceremony alongside his wife, Meghan, the Duchess of Sussex.