Ukraine: UNICEF delivers life-saving supplies for over 50,000 children in Odesa 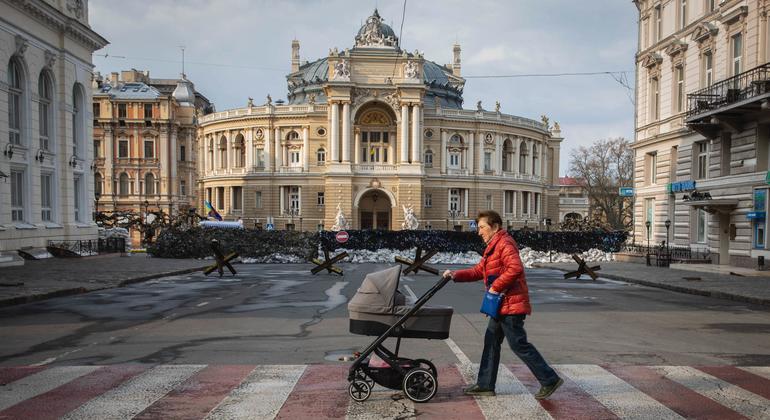 Amid continuing hopes that the first shipments of stranded grain could leave Ukraine’s Black Sea ports within days, 50 tons of different humanitarian supplies, initially destined for another hard-hit location, have been delivered to the severely affected Government-controlled settlement of Stepnohirsk.“UNICEF is delivering life-saving supplies to important areas including Odesa and surrounds, so we can quickly respond to the most vulnerable families who are affected by the ongoing fighting and shelling in eastern Ukraine,” said UNICEF Ukraine Representative Murat Sahin.

According to the Humanitarian Coordinator for Ukraine, Osnat Lubrani, medicine, food, blankets and supplies for children were delivered to Stepnohirsk and will also be sent to the neighbouring town of Prymorske.
Around 110,000 people will benefit said UNICEF, from the filters and chemicals which were part of the aid delivery, along with hygiene kits which should help keep some 14,000 children healthy.
About 5,000 people in urgent need will benefit from the items delivered.

Due to the ongoing hostilities, UN and humanitarian partners have been unable to deliver any assistance to non-Government-controlled areas since the start of the war.

So far, the city has been relatively unscathed compared with the near total destruction of Mariupol further to the east. But on Saturday, Russia launched cruise missile strikes, reportedly confirming on Sunday via a foreign ministry spokesperson, that it had been targeting military infrastructure in Odesa port.— Osnat Lubrani (@OsnatLubrani) July 26, 2022

Ms. Lubrani called on all the parties to the conflict to allow life-saving aid to reach those most in need.
Last Friday’s UN-brokered deal paving the way for Ukraine to begin exporting grain once more to markets in the developing world, will rely on being able to ship cereals out of Odesa’s main port, which has been under threat since Russia’s invasion of Ukraine in February, and the mining of waterways around the coastal city.

As well as Odesa city, these supplies will be delivered to regions close to the fighting, including Mykolaiv, which has come under heavy shelling in recent weeks.
Using a total of 27 cargo trucks, UNICEF was able to access the southern Ukrainian city and pre-position water purification equipment, sanitation and hygiene supplies, to prevent sickness due to lack of clean water and sanitation – a major threat to vulnerable families caught in war.
Yesterday we managed to deliver 50 tons of humanitarian supplies to the people in Stepnohirsk, Zaporizka oblast. Yet, since the start of the war, we haven’t been able to deliver life-saving aid to so many in non-Government-controlled areas. pic.twitter.com/bybyuRmayJ
In this instance, the town of Polohy, could not be reached, said a statement from UN humanitarians in Ukraine, issued on Monday night.
“Provision of safe water supplies and hygiene kits will help an estimated 50,000 children stay healthy in these challenging circumstances.”
Additionally, the supplies will contribute to improving the living conditions of internally displaced families and children, many of whom have fled to Odesa from war-affected districts.