Mr. Guterres recognized that the small island low-lying coastal states of the Caribbean are especially vulnerable to what he called “the biggest challenge facing our world today” — the climate crisis.“The war in Ukraine cannot lead to short-sighted decisions that shut the door on 1.5C. With the commitments presently registered, emissions are still predicted to grow by 14 per cent through 2030. This is simply suicide – and it must be reversed.”

Although Suriname is part of the South American continent, it is considered a Caribbean nation due to its history, culture, and the similar challenges it faces with the small island nations.

At the podium, the Secretary-General highlighted the region’s diversity and climate action leadership, while outlining a series of actions to be taken in the face of the planetary crisis, the ongoing COVID-19 pandemic, and global financial challenges. A group of Chinese-Surinamese dance and sing while Heads of State and Government arrive to the 43rd CARICOM Conference in Paramaribo, Suriname.

A moment of ‘maximum peril’

“And it is time for a frank discussion and space for decision-making regarding the loss and damage that your countries are already experiencing,” he emphasised.
However, before reaching the protected area, the UN chief could see that Suriname’s forests are seriously threatened by the activities of the mining sector and timber production, both fuelled by incentives to boost economic activities. Among the immense green cover, patches of deforestation, destructive gold mining and flooding were difficult to miss.
From above, the rainforest canopy was painted with countless shades of green, with some treetops covered in waves of orange or even purple flowers. Along the way, the mighty Coppename River, as well as the upstream parts of the Lucie, Saramacca, and Suriname Rivers flowed by the trees in what looked like a landscape painting.
UN News/Laura Quiñones
Suriname is the most forested country in the world, but its pristine rainforests are being threatened, among others, by mining for gold, bauxite and kaolin.
“We’re not out of the woods yet… And we need to continue working closely together to stop the spread of the virus across the Caribbean through proven public health measures and prepare for future pandemics through bold investments in preparedness and training,” he stated, and stressed that countries must never again be so unprepared.
“On the debt side, we need immediate relief for developing countries whose debt is about to become due,” he said.
The Secretary General underlined that developing economies need access to financing at no or low costs, as well as debt relief and restructuring. 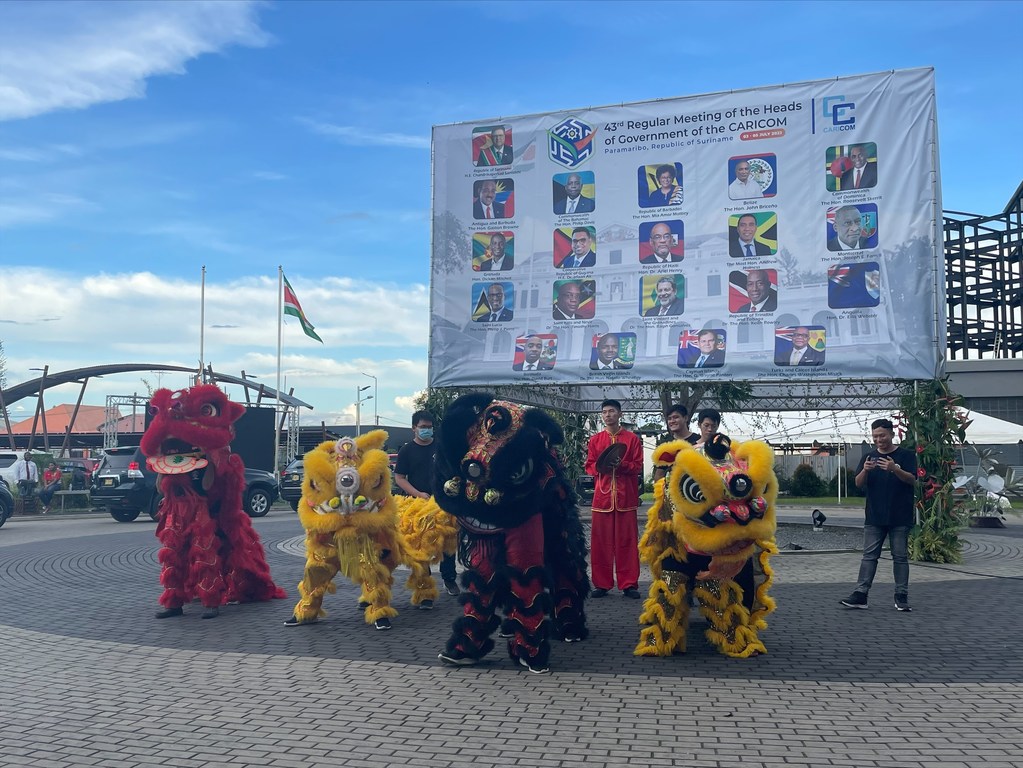 “The Caribbean is ground zero for the global climate emergency,” he said, underlining that unfortunately, it is not the only challenge that the region is facing.“This year’s CARICOM summit comes at a moment of maximum peril – for people and planet alike,” he added, referring to the devastating effect of the COVID-19 pandemic on health systems and tourism, as well as on economic growth and foreign investment, now exacerbated by the war in Ukraine.

1. Matching climate action to the scale and urgency of the crisis

Finally, Mr. Guterres reaffirmed the support of the United Nations to the Caribbean to work towards these solutions.
The UN chief added that he fully supports the creation of a Caribbean Resilience Fund and the reform of the international financial system to help the region better respond and prevent massive vulnerability to external shocks.
UN Secretary-General António addresses the opening ceremony of the 43rd regular meeting of the Conference of Heads of Government of the Caribbean Community (CARICOM), which is taking place from July 3-5 in Paramaribo, Suriname.

“Rich in diversity, uniting land and sea, and protecting fragile coastal ecosystems, mangroves are a fitting symbol of Caribbean nations – facing challenges, seizing opportunities, preserving natural gifts,” the UN chief told the region’s Heads of State and Government on Sunday, inspired by his isit to these coastal carbon-sink wonders in Paramaribo a day before.
Later on Sunday, the UN chief arrived at the Assuria Event Centre in Paramaribo, to attend the opening of the 43rd Caribbean Community and Common Market (CARICOM) Conference.

He added that more ambition and climate action are needed by all, but specially the G20 who account for 80 per cent of global emissions.“For your countries, this would mean ensuring that the complex and interdependent factors of debt and climate change impact are captured in any eligibility analysis for debt relief and financing,” he told the Caribbean Heads of State and Government.

The Secretary-General made a push for governments, organizations and pharmaceutical companies to work better together to locally produce tests, vaccines and treatments.

“I thank Caribbean leaders for helping to show the way. I am inspired by your many efforts to safeguard your incredible biodiversity and natural gifts, including by the efforts of the indigenous communities,” he said.
Mr. Guterres called for urgent and transformative emissions reduction to halt global warming at a 1.5C, support for adaptation from climate impacts, and financial assistance to secure resilience.

3. Keep up the combat against the COVID-19 pandemic

The Reserve, a UNESCO World Heritage Site, is an immense green protected area covering around 11 percent of the national territory, is recognized for its tabletop mountains and endless biodiversity – some believed to be undiscovered – and remains for the most part inaccessible and unaffected by human activity.
The UN chief stressed that wealthier countries need to lead the way in a just and equitable “ renewables revolution ”, and they need to fulfil their promise to deliver 0 billion in climate finance for adaptation starting this year.
The Secretary-General told the CARICOM leaders that bold solutions were necessary to tackle these issues, highlighting three.