In turbulent times, ‘work of the United Nations is more necessary than ever’: Guterres

Further, the war in Ukraine has caused distress for millions of people in and far beyond the country and has amplified the effects of the climate crisis and long-standing inequalities around the world.In his Annual Report, released on Thursday just ahead of the yearly gathering of world leaders at UN Headquarters in New York next week, the UN chief said that the pandemic persists and, with less than 20 per cent of people in low-income countries vaccinated, recovery is uneven. 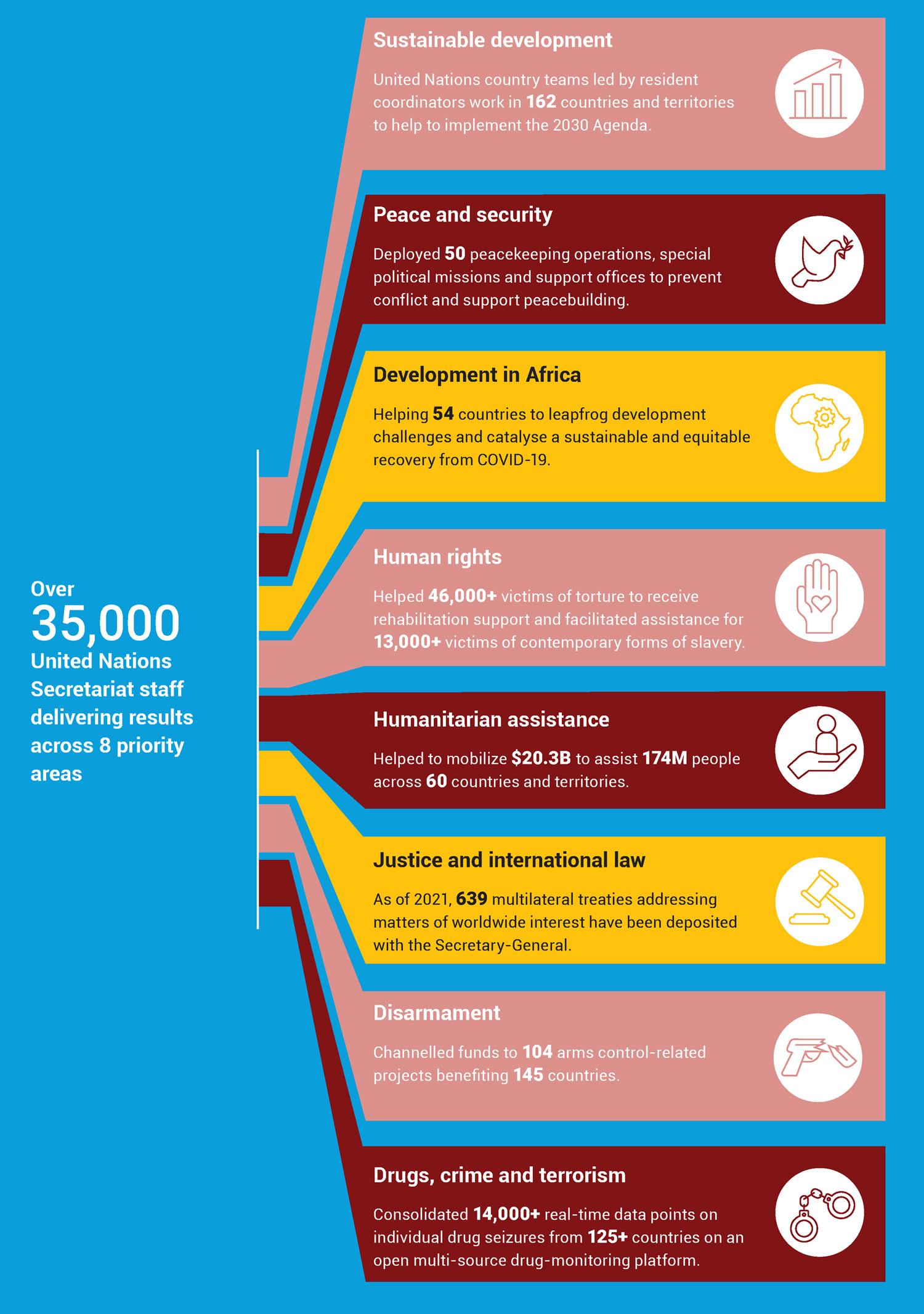 In 2021, response plans coordinated by the United Nations required .7 billion to provide life-saving assistance and protection to 174 million people across 60 countries. With the generous support of donors, and together with our partners, we mobilized a record .25 billion and reached some 107 million people with assistance.“The United Nations deployed a range of tools to prevent, mitigate, manage and resolve conflicts, protect civilians, confront the threats facing women and children and build pathways out of conflict and crisis to sustainable development and peace, he said, noting for example that in Yemen, the UN had facilitated a renewable two-month truce that has reduced violence around the country.

Across all efforts, the UN chief said the Organization remained guided by the Charter, human rights frameworks, the Sustainable Development Goals (SDGs) “and other internationally agreed commitments aimed at securing a sustainable, peaceful and inclusive future and prosperity for all, in harmony with nature, and ensuring no one is left behind.”

“Following the outbreak of war in Ukraine, we consistently spoke out in support of the country’s sovereignty, independence and territorial integrity in line with the Charter and on the need for compliance with international law and for accountability,” he said, adding: “We also actively engaged in negotiations to facilitate unimpeded exports of grains, other foodstuffs and fertilizers to help tackle the global food crisis, which resulted in the Black Sea Grain Initiative signed by Ukraine, the Russian Federation and Türkiye under the auspices of the United Nations on 22 July 2022.”United Nations

“Our efforts to end discrimination against women and girls included the Generation Equality Forum, which catalyzed pledges on policy, programming and advocacy and billion in financial commitments,” said the Secretary-General, noting that as part of the Organizations’ work to mobilize action on the prevention of and response to survivors of gender-based violence, the Spotlight Initiative had allocated million to civil society and women’s grass-roots organizations and strengthened national action plans to eliminate violence against women and girls in more than 30 countries across the globe.

With all this in mind, Mr. Guterres stressed in the introduction to the Report that throughout 2021, the United Nations, as a platform for international cooperation and solidarity, convened stakeholders and drove global advocacy and cooperation to, among others, reduce poverty, tackle climate change and propel energy and digital transformation, and reform food systems.Somali women and girls wait to be seen at health clinic that treats civilians affected by extremist group Al-Shabaab in and around Mogadishu.

Peace and Security under ‘enormous strain’

The Sustainable Development Goals are a blueprint to achieve a better and more sustainable future for all.
And looking ahead, Mr. Guterres stressed that in the next year, “we will continue to help build resilience and reduce suffering, while pursuing the long-term strategies set out in my report on Our Common Agenda to prevent crises, manage risks and build a sustainable future for all.”
“In these turbulent times, the work of the United Nations is more necessary than ever. We are acutely aware that a reactive approach to crisis is failing the world’s people,” he said.

The Secretary-General went on to say that through his landmark report on Our Common Agenda, the Organization had launched and carried forward long-term recommendations, proposing solutions at the national, regional and global levels, to build a more equal, resilient and sustainable world, based on the 2030 Agenda for Sustainable Development and the Sustainable Development Goals (SDGs) and underpinned by human rights.That report, he said, contains proposals on ways to strengthen social cohesion and solidarity, prevent and manage crises and tackle ongoing and new threats to security. “In response, Member States have endorsed proposals that can move forward immediately, and they are fully engaged on those where further work and dialogue are needed to deliver on Our Common Agenda.”

The UN chief said the international peace and security architecture is under enormous strain, as exemplified most recently by the war in Ukraine. Moreover, converging threats, geostrategic competition and systemic inequalities are having devastating consequences, not only for people caught up in violence.
2022 Report of the Secretary-General on the Work of the Organization.

Security Council Holds Late Night Emergency Meeting on UkraineThe UN chief said the Organization’s humanitarian efforts aimed to support the many millions of people thrown into need by new and protracted conflicts, devastating natural disasters, the fallout of climate change and the consequences of the COVID-19 pandemic.

UN’s work ‘more necessary than ever’

During a special event held to mark Universal Children’s Day, youth from around the world hold signs calling for peace.
“Collectively across the United Nations system, we offered policy options and solutions, helped to shape strategies and amplified the voices of those on the front lines and those marginalized,” he continued, also noting the Organization’s efforts to reduce inequality and mobilize resources and action coalitions for boosting sustainable development investments at scale to get countries back on track.