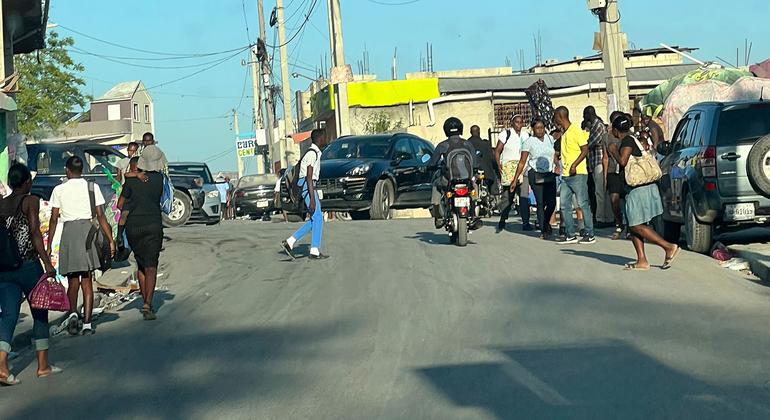 The violence has kept people trapped in their homes or neighbourhoods, and forced the closure of dozens of schools, medical centres, businesses, and markets.  Some 17,000 people have been displaced.

Kidnappings and homicides also are on the rise.  Last month alone, 201 people were killed, and 198 abducted, representing an average for each of almost seven cases per day. — UN Political and Peacebuilding Affairs (@UNDPPA) June 16, 2022

“Resolute efforts are needed not only to enable courts to process and try a myriad of pending cases, but also for prolonged pre-trial detention levels to be sustainably reduced.”

Ms. La Lime, who also heads the UN Integrated Office in Haiti (BINUH), reported on growing gang control of large areas of the capital, Port-au-Prince.
The deepening sense of insecurity is exacerbated by the “seeming inability” of the Haitian National Police (HNP) to address both the situation and impunity.
Action on criminal code reform, to bring the framework in line with international norms and standards, is also needed.

Meanwhile, humanitarian needs continue to increase, particularly in the wake of the devastating August 2021 earthquake.
She called for greater support for the Caribbean nation as protracted insecurity and prolonged political uncertainty, together with the dire economic situation and growing humanitarian needs, are severely hampering development and undermining peacebuilding efforts.
Furthermore, the Government and relevant judicial institutions must urgently find consensus on the appointment of Supreme Court judges so its activities can resume.
Briefing the Security Council, Special Representative Helen La Lime called on Member States to provide greater support to #Haiti and its efforts to address the protracted insecurity and prolonged political uncertainty in the country. @BINUH_UN pic.twitter.com/EqyIXZFtQz

Initiatives on the way forward have netted few concrete results so far, she said, and BINUH is engaging with the parties in efforts towards forging consensus on a path to elections, though it is “highly unlikely” they will take place this year.
She appealed for greater support for the force, which currently lacks the human, material and financial resources to effectively fulfil its mandate.
The country has been without a functioning parliament for more than two years, the justice sector is almost completely paralyzed, and it has been a year since the assassination of its President, Jovenel Moïse.
It is estimated that 4.9 million people will require humanitarian aid this year, she said, with at least 4.5 million forecasted to need urgent food assistance.
Ms. La Lime also updated the Council on the economic situation in Haiti, saying it remains a serious cause for concern as the gross domestic product contracted by 1.8 per cent last year, and government revenues shrank.
“It is essential that Haiti remain at the forefront of the international community’s agenda, and that national authorities receive the assistance they need to address these inter-connected challenges. Nonetheless, only Haitians hold the key to unlocking sustainable solutions to the country’s protracted crisis,” she said.

“More than ever, Haiti requires immediate assistance to develop its national police and counter increasing criminality and violence,” said Ms. La Lime.
The instability is largely due to what the UN envoy described as the “prolonged institutional vacuum” in Haiti.
“The stalled investigation into the assassination of late President Moïse – to which a fifth judge in 11 months was recently assigned – epitomizes the deeply entrenched issues affecting Haiti’s justice system, a branch crippled by limited financial and material resources, frequent strikes by judicial personnel, and the deteriorating security situation,” she said.