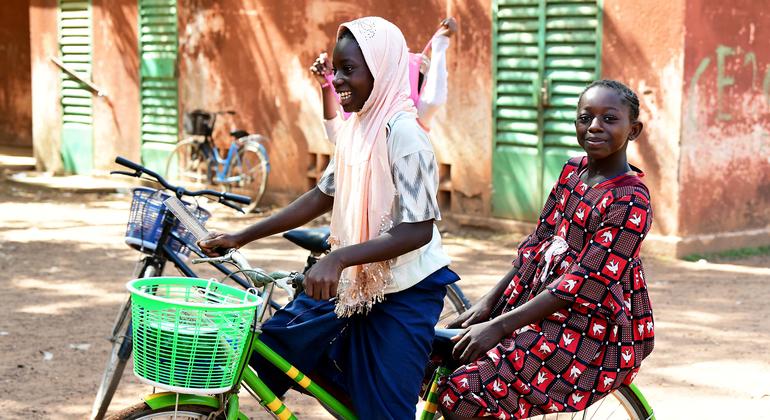 “There is no magic potion to provide an effective rebuttal to this problem of insecurity,” said Mr. Annadif, speaking in French. The envoy said several countries “are successfully reinforcing foundations of democratic governance”, including The Gambia and Senegal, which recently held local and legislative elections.
“Civilians have been caught in the crossfire between armed groups fighting for supremacy, as well as in anti-terrorist actions carried out by the national security and defence forces,” he said.

Mr. Annadif reported that as of May, the number of civilian victims of extremist violence in the central Sahel has surpassed the total figure for 2021.
The violence has had an impact on the humanitarian situation at a time when West Africa is experiencing an “unprecedented” food crisis.  Across the so-called G5 Sahel countries – Burkina Faso, Chad, Mali, Mauritania, and Niger – some 12.7 million people are facing food insecurity, a 45 per cent increase over last year.
“The information that we all receive on massacres of unarmed and innocent civilian populations, including women and children, convey the tragedy that is unfurling in this part of the world.”
Meanwhile, military authorities are facing difficulties in addressing the worsening security situation in the Sahel.

He has also been in contact with the transitional authorities in Burkina Faso and Guinea, stressing the need to return to constitutional order as soon as possible.
They are currently finalizing discussions towards establishing a secretariat, and contributing to capacity building through the UN Office on Counter-Terrorism (UNOCT).
Extremist violence is moving southward, he reported, and has gone from being a phenomenon of isolated incidents to a very real threat in coastal countries. He cited the example of Togo, where a state of emergency has been declared in the north.
Mr. Annadif highlighted some of the dichotomies across a vast region that continues to “develop at different rhythms”. While citizens in some countries are freely exercising their right to vote, elsewhere “military stakeholders” are trying to dominate the political space.

Caught in the crossfire

Mr. Annadif said engagement by the UN and regional bloc ECOWAS has also helped to reduce political tensions in Sierra Leone, which will hold elections next June.
“National dialogues are underway in many countries to consolidate democratic governance at the same time that across large parts of the Sahel, men and women are leaving their land, fleeing to safety, and to ensure that their children can receive an education,” he said.
Addressing insecurity, Mr. Annadif said it was “no longer a secret to anyone” that extremist groups and criminals are exploiting weaknesses that have been exacerbated by often inadequate State structures.
Khatir Mahamat Saleh Annadif was presenting the latest report of the UN Office for West Africa and the Sahel (UNOWAS), which he heads, covering developments over the past six months in areas such as politics, security and human rights.
The UN official continues to advocate with ECOWAS and other partners in favour of the Accra Initiative, a 2017 plan on preventing instability from spreading to coastal countries.

“Furthermore, there is a process of dialogue in a number of countries. This creates political consensus that represents an opportunity to reinforce social cohesion,” he added, referring to Nigeria, ahead of elections scheduled for next year.
Last month, Mali withdrew from the G5 Sahel and its Joint Force on counter terrorism, and Mr. Annadif said there are military redeployments at the moment that jeopardize security provision.
“What we need, rather, is democratic and responsible governance, including the setting up of decentralized administrations which can provide solutions to the day-to-day needs of the population while respecting the social contract for participation, and the mutual commitments between the Government and the citizens.”