From fighting to farming: Supporting peacebuilding in Mozambique

Through the programme, local authorities listen to the voices and needs of local communities in defining and selecting essential infrastructure and public services to be provided by the districts themselves to their communities, in order to promote sustainable local development and adaptation to climate change.
Benjamin* wants peace. A former RENAMO (Mozambican National Resistance) combatant, he dreams of working his field, in Cheringoma District, Sofala province, once again.
Just a few months ago, Benjamin became one of the thousands of former RENAMO fighters taking part in a “disarmament, demobilization and reintegration” (DDR) process. 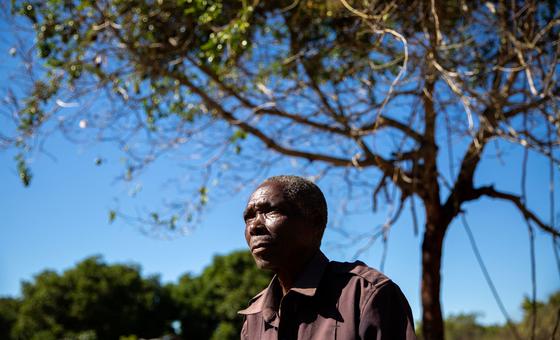 DDR is a central component of the Maputo Accord, the peace agreement between the Government of Mozambique and RENAMO, which formally put an end to decades of conflict and insecurity, and brought communities together when it was signed in 2019.Benjamin’s hopes are similar to those of other former combatants and communities affected by conflict in Mozambique: they want to build new, productive lives for themselves, their families, and their communities. By supporting these dreams in a practical way, the UN is helping them to create a better future for Mozambique.

‘We are very happy to be back’

Now, Benjamin is learning new skills alongside members of the community he left more than 20 years ago and reconnecting with his family.

The UN’s role in the programme is to support the authorities in strengthening the inclusion of local voices in planning and budgeting exercises, as a solid foundation for promoting lasting peace, national reconciliation and inclusive sustainable development.
“From the moment that my brothers and I started our reintegration into the community and society, I have a sense of relief and happiness. We are very happy to be back”, says Benjamin. “Since we came to the community, there have been no issues; I have been welcomed as a brother”.
*Name has been changed.
Galício António, chief of the Nhamaze Administrative Outpost in Gorongosa District, confirms Benjamin’s sentiments, and the importance of reconciliation. “They are back, and they are producing again”, he declares. They are educating their children, they are integrating into social life, they are participating in the community”.
Through participatory processes, community members, including former combatants, will be able to participate in the local development planning exercises.
“I am very happy; The community is happy” says Benjamin. “This peace must go on. This is our will”.

Community members working in their fields together in Inhaminga village, Sofala Province.