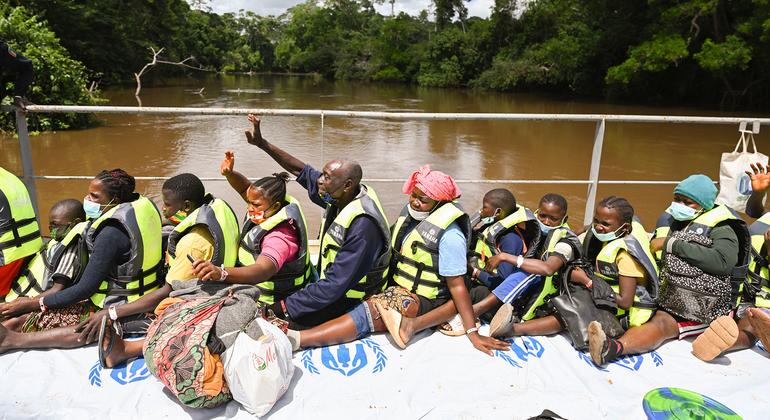 Mr. Grandi travelled to the Liberian border to accompany Ivorian refugees on the last stage of their journey home by ferry across the river that marks the frontier between the two countries.A wonderful occasion to celebrate together #WorldRefugeeDay! pic.twitter.com/ecJvADOM3y
At a ceremony on Saturday in Abidjan hosted by the President of the Republic of Côte d’Ivoire, Alassane Ouattara, and featuring national representatives and ambassadors from countries that hosted Ivorian refugees, High Commissioner Filippo Grandi met former refugee families and wished them well on their return home.
“For those of us in UNHCR, nothing is better than witnessing the end of exile. After two decades, Ivorian refugees can come home safely and in dignity. They are proud Ivorians – living and working in their own communities or in neighboring countries,” he said.

Thank you President @AOuattara_PRCI and thank you Côte d’Ivoire 🇨🇮 for creating the conditions to end the exile of Ivorian refugees, and for having received back in the country the 310,000 who have already returned.Over 11,000 of the 14,000 people who have returned this year, have arrived from neighbouring Liberia, where UNHCR is organizing weekly transportation for Ivorians wishing to return home.— Filippo Grandi (@FilippoGrandi) June 20, 2022

the West African nation.
Last month, UNHCR announced that the war in Ukraine and other ongoing crises, had pushed the number of people forced to flee conflict and persecution worldwide beyond 100 million for the first time.
The development follows the peaceful resolution of two decades of intermittent civil strife, and political instability i

“The return of hundreds of thousands of Ivorians demonstrates to the region – and the world – what is possible when there is political will to end violence and true cooperation among nations.”
Ivorians returning home may face challenges reintegrating, and will need sustained help, said UNHCR, but the Government has committed its support to their reintegration and local communities are welcoming them back.
Thousands of people also fled to neighbouring countries just two years ago, amid fears of violence linked to presidential and parliamentary elections.
More than 310,000 Ivorian refugees, or 96 per cent of all those registered across West Africa, have chosen to return.
Liberian authorities formally delivered birth certificates to their Ivorian counterparts, to ensure returnees can enroll their children in schools, obtain national identity cards and register to vote.

Grandi at the border

The process to formally end refugee status for Ivorian refugees comes into effect on 30 June, acknowledging the end of an era of displacement for hundreds of thousands.
The High Commissioner pledged UNHCR’s continued support to Côte d’Ivoire and the countries that hosted Ivorian refugees to implement the cessation clauses, and assist all those wishing to return home.
Under the terms of the cessation agreement, countries hosting Ivorian refugees are encouraged to facilitate their voluntary repatriation, or, for those few Ivorians who have chosen to remain, to facilitate local integration, a path to permanent residency and naturalization.
Ivorians fled the country in two distinct waves, following civil strife between 2002 and 2007, and 2011 and 2012, UNHCR noted.

Joint press release on the occasion of the 30th anniversary of...