COP27 closes with deal on loss and damage: ‘A step towards justice’, says UN chief

He went on to say that civil society should take significant credit for bringing the international community to this historic moment in the combat against climate change.“Clearly this will not be enough, but it is a much-needed political signal to rebuild broken trust,” he underscored, stressing that the UN system will support the effort every step of the way.   The UN chief also emphasized the need to make good on the long-delayed promise of 0 billion a year in climate finance for developing countries, establishing clarity and a credible roadmap to double adaptation funds.   The UN chief was referring to what ended up becoming the thorniest issue at this COP, shorthand for the annual Conference of Parties to the UN Framework Convention on Climate Change (UNFCCC).  After missing their Friday night deadline, negotiators were finally able to reach conclusions on the most difficult items of the agenda, including a loss and damage facility – with a commitment to set up a financial support structure for the most vulnerable by the next COP in 2023 – as well as the post-2025 finance goal, and the so-called mitigation work programme, that would reduce emissions faster, catalyze impactful action, and secure assurances from key countries that they will take immediate action to raise ambition and keep us on the path towards 1.5°C.  “We are already halfway between the [2015] Paris Climate Agreement and the 2030 deadline.  We need all hands on deck to drive justice and ambition,” he stated.  The Egyptian leadership also announced launched the Food and Agriculture for Sustainable Transformation initiative or FAST, to improve the quantity and quality of climate finance contributions to transform agriculture and food systems by 2030.  “The most vital energy source in the world is people power. That is why it is so important to understand the human rights dimension of climate action,” he said, adding that the battle ahead will be tough and that “it will take each and every one of us fighting in the trenches each and every day…we can’t wait for a miracle.”  Other initiatives announced at COP27 included:  The tool combines satellite data and artificial intelligence to show the facility-level emissions of over 70,000 sites around the world, including companies in China, the United States and India. This will allow leaders to identify the location and scope of carbon and methane emissions being released into the atmosphere.

The combat against climate change continues

The Secretary-General added that this includes ambition to end the “suicidal war” on nature that is fuelling the climate crisis, driving species to extinction and destroying ecosystems.   He renewed his call for just energy transition partnerships to accelerate the phasing out of coal and scaling up renewables and reiterated the call he made on his opening speech at COP27: a climate solidarity pact.   Developing countries made strong and repeated appeals for the establishment of a loss and damage fund, to compensate the countries that are the most vulnerable to climate disasters, yet who have contributed little to the climate crisis.  Observers have warned that new language including “low emissions” energy alongside renewables as the energy sources of the future is a significant loophole, as the undefined term could be used to justify new fossil fuel development against the clear guidance of the UN Intergovernmental Panel on Climate Change (IPCC) and the International Energy Agency (IEA). Mr. Shoukry added: “The world is watching, I call on us all to rise to the expectations entrusted to us by the global community, and especially by those who are most vulnerable and yet have contributed the least to climate change.” 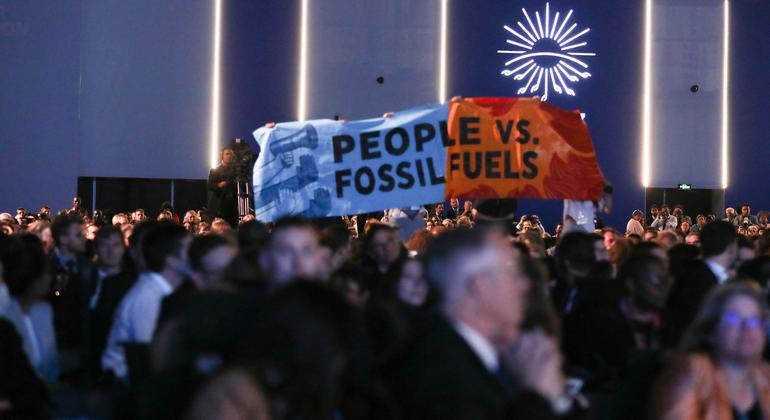 Our planet is still in the emergency room

This was the first COP to have a dedicated day for Agriculture, which contributes to a third of greenhouse emissions and should be a crucial part of the solution.  Meanwhile, former US Vice-President and climate activist Al Gore, with the support of the UN Secretary-General, presented a new independent inventory of greenhouse gas emissions created by the Climate TRACE Coalition.  Kiara Worth The negotiations at COP27 had not been easy. “…Not been easy at all. But this historic outcome does move us forward and it benefits the vulnerable people around the world,” he stated. “Next month’s UN Biodiversity Conference is the moment to adopt an ambitious global biodiversity framework for the next decade, drawing from the power of nature-based solutions and the critical role of indigenous communities,” he urged.  Mr. Stiell added that he would personally shepherd the drive forward on Nationally Determined Contributions, or NDCs, which are at the core of the Paris Agreement and embody efforts by each country to reduce national emissions and adapt to the impacts of climate change. The highlights of the meeting included, among others, the launch of the first report of the High-Level Expert Group on the Net-Zero Emissions Commitments of Non-State Entities.  Kiara Worth COP27 convened over 35,000 people, including government representatives, observers and civil society.  In his closing remarks, UNFCC Executive Secretary Simon Stiell, said: “At COP27… we’ve determined a way forward on a decade-long conversation on funding for loss and damage.” Among other positive steps, he said that in the text adopted Sunday morning, “we have been given reassurances that there is no room for backsliding. It gives the key political signals that indicate the phase-down of all fossil fuels is happening.” Kiara Worth