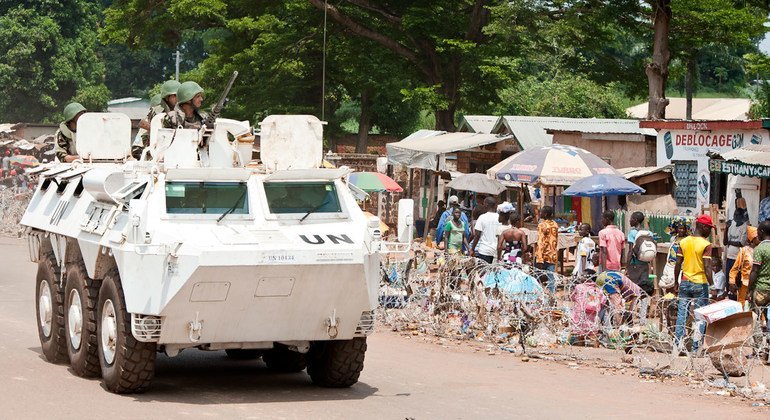 The MINUSCA chief said the mission had been taking a “robust, preventive and proactive posture” responding to security alerts from various civilian communities in the face of continuing threats from armed groups.

He recalled that such attacks “may constitute war crimes under international law” and called on the Government of CAR “to spare no effort in identifying the perpetrators of this tragedy so that they can be brought to justice swiftly.” Following decades of instability, in 2012, the mostly Muslim Seleka rebel coalition launched a series of attacks leading to them capturing control of the capital, and the transfer of power to a transitional government, but sectarian conflict was exacerbated by the rise of the predominantly Christian anti-Balaka movement. She promised that the mission would continue to position forces where needed to help restore order, advance disarmament and rehabilitation efforts, and help cut off rebel supply routes. Council members expressed their full support for MINUSCA, and “expressed their deep appreciation” to the mission’s troop and peace-contributing nations, while also stressing the importance of the mission continuing to have the necessary capacities to carry out its mandate.  In a statement, the UN integrated stabilization mission in CAR, MINUSCA, said the attack at the Obo airfield near the border with the Democratic Republic of the Congo and South Sudan, had taken place on Thursday morning, and that the mission had “immediately opened an investigation into the exact circumstances” surrounding the incident.

In his statement released via his Spokesperson’s Office in New York, UN chief António Guterres expressed his deepest condolences to the family of the fallen peacekeeper and to the Kingdom and people of Morocco.”  Early that month, three peacekeepers were killed patrolling near the Cameroon border, and MINUSCA has repeatedly called on the Government to lift a ban on UN night flights, for the safety and personnel and effectiveness of humanitarian aid distribution. The Security Council also issued a statement late on Friday, condemning the attack “in the strongest terms”, stressing that anybody found to be involved in the planning, direction or sponsoring of such attacks, could be sanctioned. With its mandate renewed just a few weeks ago for a further year, MINUSCA has continued to play a key role in recent months, countering still widespread insecurity, Mission chief Valentine Rugwabiza told the Security Council in October.

MINUSCA reminded that any attack on a ‘blue helmet’ was liable to prosecution by both national and international authorities. The latest UN report for the Security Council pointed to the “indispensable contribution” of MINUSCA’s multidimensional mandate, which the search for lasting political solutions continues in CAR, she said Mr. Guterres reaffirmed the solidarity of the United Nations with the people and Government of CAR, where MINUSCA has been in operation since 2014, with its first priority being to provide protection to civilians caught up in years of conflict.

No ‘fix’ to police violence, without tackling scourge in society, says...