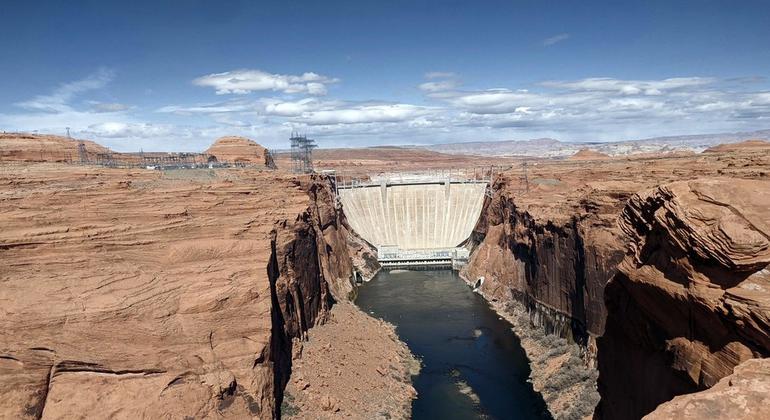 Since 1970, weather, climate and water hazards have accounted for 50 per cent of all disasters, and impact 55 million people every year. Furthermore, some 2.3 billion people globally face water stress annually.

Lake Mead and Lake Powell are currently at their lowest levels ever and are at risk of reaching “dead pool status”, meaning that the water in the dams would be so low it could no longer flow downstream and power hydroelectric power stations. This information is included in a compendium titled Drought in Numbers, published in May by the UN Convention to Combat Desertification (UNCCD), which works to reverse land degradation.   — UN Environment Programme (@UNEP) August 2, 2022

Two of the largest reservoirs in the United States are in danger of reaching ‘dead pool status.’
“While regulating and managing water supply and demand are essential in both the short and long term, climate change is at the heart of this issue,” said Maria Morgado, UNEP’s Ecosystems Officer in North America. “In the long term we need to address the root causes of climate change as well as water demands.”
“The conditions in the American west, which we’re seeing around the Colorado River basin, have been so dry for more than 20 years that we’re no longer speaking of a drought,” said Lis Mullin Bernhardt, an ecosystems expert at UNEP. “We refer to it as ‘aridification’ – a new very dry normal.”
What’s happening in the American west is part of a wider trend affecting hundreds of millions of people across the world who are impacted by climate change, UNEP said, as drought and desertification are quickly becoming the new normal everywhere – from the US to Europe and Africa.

With more frequent droughts, people in affected areas will increasingly depend on groundwater.
Meanwhile, increases in water demand – due to growing populations, for example – have compounded climate change impacts such as reduction in precipitation as well as temperature rises, which lead to increased evaporation of surface water and, ultimately, decreasing soil moisture.
Lake Mead, located in Nevada and Arizona, was created in the 1930s by the construction of the Hoover Dam on the Colorado River. It is the largest artificial body of water in the US.
The Decade runs through 2030, which is also the same timeline for achieving the Sustainable Development Goals (SDGs).
Overconsumption & the #ClimateCrisis could lead to water levels?so low that downstream flows to hydroelectric plants would stop ⤵️https://t.co/ToIZw2fIPM
The reservoirs provide water and electricity to tens of millions of people in the states of Nevada, Arizona, California, Wyoming, Colorado and New Mexico, and in Mexico, as well as irrigation water for agriculture.

Lake Powell, located in Utah and Arizona, is the second largest and was created in the 1960s with the construction of the Glen Canyon Dam.
“We are talking about a 20-year period of drought-like conditions with an ever-increasing demand on water,” said Ms. Bernhardt. “These conditions are alarming, and particularly in the Lake Powell and Lake Mead region, it is the perfect storm.”
Experts warn that as the crisis deepens, water cuts will need to be introduced, but may not be enough.
UNEP is among the lead agencies for the UN Decade on Ecosystem Restoration, aimed at countering climate change and halting biodiversity.
Drought is among several factors that impact land degradation. Between 20 to 40 per cent of the world’s land is classified as degraded, affecting half the global population and impacting croplands, drylands, wetlands, forests and grasslands.
Over the past two decades, most major disasters – 90 per cent – were caused by floods, droughts, and other water-related events, according to the UN agency.