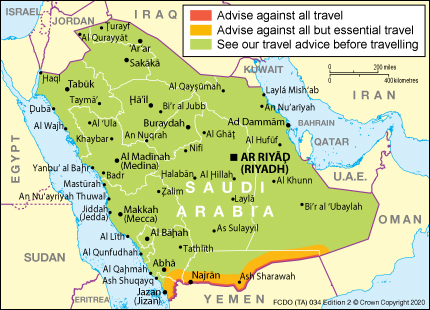 The Foreign, Commonwealth & Development Office (FCDO) advises against all travel to:

If you’re currently in an area where the FCDO advise against all but essential travel, you should consider whether you have an essential reason to remain. If you don’t, you should leave the area.

If you are arriving in the UK from Saudi Arabia on or after 4am on 18 January you will need to self-isolate on your arrival, unless you have a valid exemption. Check the latest guidance for England, Northern Ireland, Scotland and Wales.

Travel to and from Saudi Arabia is subject to entry restrictions.

If you’re planning travel to Saudi Arabia, find out what you need to know about coronavirus there in the Coronavirus section.

Terrorists are very likely to try to carry out attacks in Saudi Arabia. Attacks can be indiscriminate, including in places visited by foreigners. Daesh (formerly referred to as ISIL) claimed responsibility for an attack on 11 November 2020 which targeted a ceremony in Jeddah, commemorating the end of World War I, using an explosive device. On 11 November 2019, a terrorist carried out a knife attack on artists performing on stage during Riyadh Season Festival, injuring four people. You should be vigilant and follow the advice of the local authorities. See Terrorism.

There’s a heightened risk of terrorism against aviation interests. Additional security measures have been in place on flights departing from Saudi Arabia to the UK since March 2017. You should co-operate fully with security officials. Restrictions on carrying large electronic devices in the aircraft cabin on these flights have now been lifted. For more information and advice about what items you can take into the cabin on your flight from Saudi Arabia to the UK, contact your airline or travel company.

Following the attack on the coalition base at Taji in Iraq on 11 March, and subsequent US airstrikes, tensions may be raised across the region. There is a possibility of an increased threat against Western interests, including against UK citizens. You should remain vigilant and keep up to date with the latest developments, including via the media and this travel advice.

Saudi Arabia has been leading coalition air strikes in Yemen since 2015, following a request for support from President Hadi to deter continued Houthi aggression. Clashes along the Saudi-Yemeni border continue, resulting in both military and civilian casualties.

Missiles, Unmanned Aerial Vehicles (drones) and water borne IEDs continue to be launched against Saudi Arabia, targeting critical national infrastructure, including aviation interests and oil infrastructure. Many of these have been intercepted and destroyed by Saudi air defence systems. Local media reported that Unmanned Aerial Vehicles were intercepted over Riyadh on 23 January 2021.

Attacks against critical national infrastructure are likely. Abha International Airport (Asir province) had been the target of a number of attacks, resulting in injury to civilians and the death of one. On 14 September 2019, Aramco facilities in Abqaiq and Khurais were hit by drones and missiles. On 23 November 2020, a petroleum products distribution station north of Jeddah was subject to an aerial attack causing an explosion.

Attacks may be made on other locations in Saudi Arabia, including Riyadh and Jeddah, and along the Red Sea coast. There have been 9 intercepted missile attacks over Riyadh since the first missile attack on 4 November 2017, the most recent on 10 September 2020. In the event of a missile attack, you should stay indoors, monitor local media reports and follow the advice of the local authorities. See Local travel – Saudi Arabia-Yemen border.

All visitors, including pilgrims, need a visa to enter Saudi Arabia. See Visas.

All points of entry between Saudi Arabia and Qatar were reopened on 4 January 2021. If you have a query relating to travel plans, contact your airline or tour operator.

Public demonstrations are illegal in Saudi Arabia. Follow local media and be alert to local and regional developments which might trigger public disturbances. Despite warnings issued by the authorities, demonstrations do take place from time to time. You should avoid protests or demonstrations. See Political situation.

Due to security operations within the Qatif region of Eastern Province, British Embassy staff have been advised to travel within the region in daylight hours only. See Local travel.

On 22 June 2020, the Saudi authorities announced that, due to the Covid-19 pandemic, pilgrims from outside the Kingdom would not be permitted to enter Saudi Arabia to perform Hajj in 2020. Hajj rites were only performed by a very limited number of pilgrims who already reside in the Kingdom. The Saudi authorities have gradually allowed pilgrims to perform Umrah at limited capacity. British nationals resident in Saudi Arabia can apply to perform Umrah through the official Ministry of Hajj app. For more information and advice, see the Pilgrimage and Health sections.

Consular support is severely limited in parts of Saudi Arabia where we advise against travel, and limited in the areas we advise against all but essential travel. If you’re abroad and you need emergency help from the UK government, contact the nearest British embassy, consulate or high commission.

Cases of Middle East respiratory syndrome coronavirus (MERS-CoV) in patients from Saudi Arabia continue to be reported to the World Health Organization. For the latest information and advice, see the website of the National Travel Health Network and Centre.