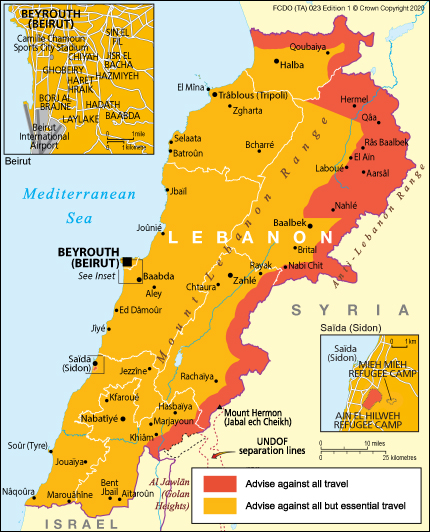 The Foreign, Commonwealth & Development Office (FCDO) advise against all travel to:

In addition, the FCDO advises against all but essential travel on security grounds to:

Travel to Lebanon is subject to entry restrictions

From Monday 11 January 2021, all travellers to Lebanon will be required to take a PCR test at Beirut International Airport upon arrival (which is provided at the airline’s expense) and then to quarantine for one week. You must quarantine at a Government of Lebanon approved hotel for 48 hours until you receive the results of your airport test. Buses will transport passengers from the airport to hotels. You must have a prepaid booking at one of these hotels in order to board your flight to Lebanon. See further details here. When you receive your airport test result, if it is negative, you may move to your accommodation. You must continue to quarantine at your accommodation before taking another PCR test (that you must arrange yourself) a week after your arrival. If both tests are negative, you may leave quarantine. See entry requirements.

Lebanon has declared a state of emergency from 14 January to 8 February 2021 due to the rise in number of COVID-19 cases. A total curfew will be in place from 5am on 14 January until 5am on 8 February. Movement is completely prohibited – you must not leave your accommodation. All hospitality businesses and public institutions will close. There are some exemptions for essential work. Food delivery services will be allowed to operate between 5am and 5pm.

There are ongoing security operations in Baalbek and the surrounding areas following clashes between rival criminal gangs, and instances of armed carjacking have increased in the area. See Safety and security.

On 4 August 2020 a large explosion occurred in the port area of Beirut causing widespread damage to buildings and infrastructure in the city and surrounding areas.

Damage and the ongoing situation at the port and in areas close to the port remains an ongoing hazard and could pose a risk to your personal safety. You should exercise caution in the area, stay away from collapsed buildings, monitor the local news and follow the advice of the local authorities.

The British Embassy in Beirut has been informed by the Lebanese authorities that, exceptionally given the current situation, British nationals travelling to the UK will be permitted to depart Lebanon on an expired passport, without requiring an emergency travel document. Before travelling you should confirm with your airline that they will accept this. If you are travelling to, or transiting, another country then you will need to ensure that your passport will also be accepted there.

If you’re planning travel to Lebanon, find out what you need to know about coronavirus there in the Coronavirus section.

Protests against the political and economic situation in Lebanon, which began in October 2019, are continuing. The protests have centred on Beirut and Tripoli, but have occurred at various locations nationwide, including in the Beqaa Valley and Saida, often with little notice. Violent confrontations between protesters, security forces and supporters of political groups have occurred across the country, often resulting in injuries to protestors and security forces. On 17 October, on the one year anniversary of the 2019 anti-government uprising, there were protests across Beirut. These were largely peaceful though there were minor clashes between security forces and protestors. You should avoid protests, remain vigilant and follow the advice of the local authorities.

As a result of protests, major roads (including to and from Beirut airport) have been blocked, banks and businesses have closed See Political situation

Crime, including bag theft, property crime and sexual harassment in public spaces, has increased as a result of the economic decline in Lebanon. This includes in Beirut. See Safety and security.

A conflict with Israel could spark with little warning and lead to a rapid escalation in violence. There have been exchanges between Hizballah and the Israeli Defence Force across the Blue Line in the South of Lebanon. This has included cross-border shelling. The most recent such incident took place on 27 July 2020 and there remains a risk of a further escalation. See Security situation

Terrorists are very likely to try to carry out attacks in Lebanon. You should be vigilant at all times, avoid crowds and crowded places and follow the advice of the Lebanese authorities. Previous attacks have targeted the security forces, as well as locations where Western visitors may congregate. There have been large scale counter-terrorism operations in recent months in North Lebanon. You should follow the advice of the local authorities, and check local news and this travel advice regularly. See Terrorism

There’s a heightened risk of terrorism against aviation. Additional security measures have been in place on flights departing from Lebanon to the UK since March 2017. You should co-operate fully with security officials.

There are unexploded ordnance and land mines in many places. You should avoid travelling away from established paths, especially when hiking. This is particularly a concern in southern Lebanon. See Local travel