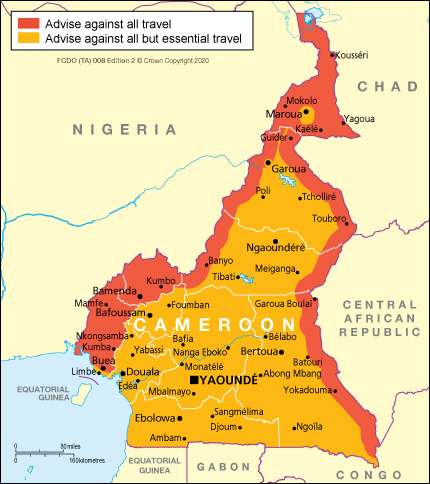 The Foreign, Commonwealth & Development Office (FCDO) advises against all travel to:

Travel to Cameroon is subject to entry restrictions

If you’re planning travel to Cameroon, find out what you need to know about coronavirus there in the Coronavirus section.

Political developments and increased tensions related to the North West and South West (Anglophone) regions could lead to isolated incidents of violence in other parts of the country. This could affect western interests, as well as places frequented by foreigners. You should enhance your vigilance and plan your movements carefully. In late November, a threat was made against diplomatic missions in Yaoundé, including the British High Commission. You should remain vigilant when moving around the city.

On Wednesday 18 November 2020, an attempt was made to detonate an IED near the rail junction in Bonabéri, west of Douala. On Sunday 1 November a small IED detonated in the Obobogo-Columbia neighbourhood of Yaoundé. Several other IEDs were detonated in Yaoundé in June, July and August 2020. It is possible that more attacks will occur in urban areas, or other locations around the country, in the future. You should remain vigilant and keep up to date with developments via the media and local authorities. See Political situation

Terrorists are very likely to try to carry out attacks in Cameroon, particularly in the Far North region. Attacks could be indiscriminate, including in places visited by foreigners such as restaurants, bars, markets, hotels, shopping centres and places of worship. The terrorist group Boko Haram and the Islamic State West Africa (ISWA) is active in the Far North region but attacks could occur anywhere, potentially including major towns and cities such as Yaoundé and Douala. There have been numerous suicide attacks since 2015, which have resulted in over 200 dead in the Far North region, although since 2017 these have been predominately adjacent to the border with Nigeria. Key targets have been large open markets, hotels, parks and sporting venues. There have also been hostages taken and heavy gunfights reported in Babouang and Mbarang in Adamawa region (Cameroon). See Terrorism

There is a heightened threat of kidnap to western nationals in the north of Cameroon, including in the major cities and along the border between the Far North region and Nigeria.
Boko Haram has publicly threatened Cameroon with attacks and further kidnappings due to Cameroon’s involvement in the regional fight to counter Boko Haram.

There have been reports of criminality including large armed gangs and highway bandits, stopping travellers, taking hostages and demanding payment, particularly in the east of Cameroon, close to the Central African Republic (CAR) border. There are frequent instances of violence in CAR spilling across the border to Cameroon. See Crime

Nigerian military operations in the states of Borno, Yobe and Adamawa in Nigeria could have an impact across the border in Cameroon.

Avoid travelling at night across Cameroon unless absolutely necessary, due to risks from criminality, poor infrastructure and erratic driving.

UK health authorities have classified Cameroon as having a risk of Zika virus transmission. For information and advice about the risks associated with Zika virus, visit the National Travel Health Network and Centre website.

There are increased reports of piracy in the Gulf of Guinea. Take great care when travelling in coastal waters, including the coastline of Cameroon and the Doula port.
Despite the high crime levels, most visits to Cameroon are trouble-free. Only a few British nationals needed consular assistance in the past year.