Visit of Foreign Minister Mevlüt Çavuşoğlu to the U.S. to attend meetings of the 74th session of the United Nations General Assembly, 27 September 2019 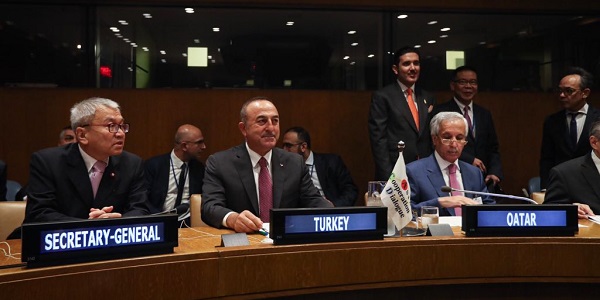 Foreign Minister Mevlüt Çavuşoğlu attended the Informal Ministerial Meeting of Asia Cooperation Dialogue (ACD) on 27 September 2019 on the margins of the 74th session of the UN General Assembly.

At the meeting hosted by our country, Turkey assumed ACD’s 2019-2020 Term Chairmanship.

On the same day, Minister Çavuşoğlu also participated in the Informal Meeting of Foreign Ministers of the Economic Cooperation Organization (ECO).

At the meeting, Minister Çavuşoğlu emphasized that in accordance of our “Asia Anew” initiative, ECO whose Term Chairmanship would be soon assumed by Turkey was important to increase cooperation in Asia.

Minister Çavuşoğlu stated that we would support steps to improve ECO’s effectiveness.

After that meeting, Minister Çavuşoğlu attended the the Annual Coordination Meeting of the Organization of Islamic Cooperation (OIC).

At the meeting, Minister Çavuşoğlu shared our vision on OIC whose 50th anniversary is celebrated this year.

Minister Çavuşoğlu stressed that as the Ummah, we would never give up on an independent, united and sovereign Palestine within 1967 borders and Al-Quds as its capital.

Minister Çavuşoğlu stated that Turkey would continue to stand by the Sudanese people who overcame a difficult period of change with commonsense.

Minister Çavuşoğlu also stated that we would support steps to be taken to contribute to regional peace and stability.