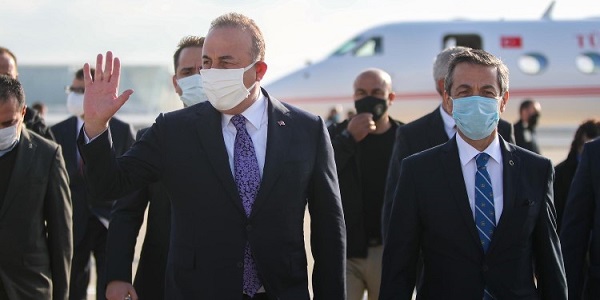 Foreign Minister Mevlüt Çavuşoğlu is visiting the Turkish Republic of Northern Cyprus (TRNC) on 1-2 February 2021 to discuss the Cyprus issue and other topics on our common agenda.

On his first day in Nicosia, Minister Çavuşoğlu first met with the Speaker Önder Sennaroğlu of the Assembly of the Republic of TRNC and congratulated him on his election to that post.

Minister Çavuşoğlu also pointed out that the Parliament’s support for the process of two-state settlement based on sovereign equality was of critical importance.

Minister Çavuşoğlu noted that we did not make any distinction between TRNC and Turkey, that we had sent 40 thousand vaccines, that we would send more, and that we would continue to stand by TRNC in the fight against COVID-19.

Finally on the same day, Minister Çavuşoğlu held a meeting with Foreign Minister Tahsin Ertuğruloğlu of TRNC, and emphasized that Turkey and the TRNC would continue to act together for a two-state settlement based on sovereign equality.