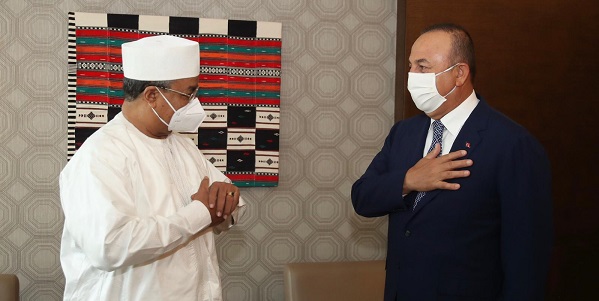 Minister Çavuşoğlu stated that we shared our experience in the fight against terrorism, and that our support and contribution to MINUSMA would continue.

Later that day, Minister Çavuşoğlu had a meeting with Pierre Buyoya, High Representative of the African Union for Mali and Sahel, and discussed the transition process in Mali.

Minister Çavuşoğlu expressed that we were a strategic partner of the African Union and that we supported its efforts towards stability and tranquility in Mali, and that we wanted to hold the 3. Turkey-African Union Partnership Summit in 2021.

On the same day, Minister Çavuşoğlu came together with our business people in Mali.

Minister Çavuşoğlu noted that their success and contribution in the development of our relations with Mali was huge, and that our Embassy and Commercial Office were ready to help 24/7.

Minister Çavuşoğlu also held talks with the members of the National Committee for the Salvation of the People (CNSP) on the transition process.

Minister Çavuşoğlu emphasized that we attached importance to the stability, security and economic development of Mali, that it was critical to re-establish without delay the constitutional order and to hold democratic elections, and that we would always stand by the friendly and brotherly people of Mali.