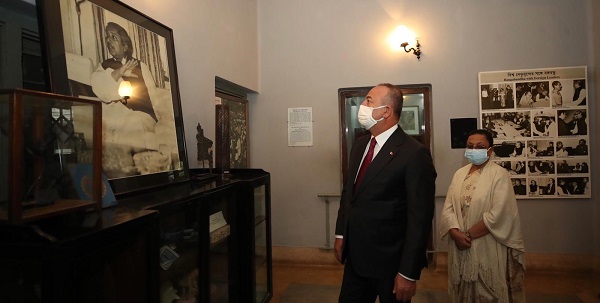 After his productive visit to Indonesia, Foreign Minister Mevlüt Çavuşoğlu visited Bangladesh on 23 December 2020 upon the invitation of his Bangladeshi counterpart A.K. Abdul Momen and to officially inaugurate our new Embassy compound in Dhaka.

Minister Çavuşoğlu first visited Bangabandhu Sheikh Mujibur Rahman Memorial Museum at the 100th birth anniversary of the Father of the Nation of Bangladesh, laid a wreath and signed the book in the respected memory of Bangabandhu.

Later, Minister Çavuşoğlu was received by Prime Minister Sheikh Hasina of Bangladesh and conveyed her the greetings of President Recep Tayyip Erdoğan.

Minister Çavuşoğlu also emphasized that we appreciated her support for our Embassy’s new compound, that Bangladesh was the rising star of South Asia with its sustainable development model, and as a such was one of the most important partners of our Asia Anew initiative.

Later that day, Minister Çavuşoğlu met with A.K. Abdul Momen of Bangladesh and thanked him for his hospitality.

Minister Çavuşoğlu stated that we were aiming to increase our bilateral trade volume up to 2 billion US Dollars, that we were evaluating cooperation opportunities on a wide range of fields from health to defense industry, that we were defending the cause of the Ummah together and that we also appreciated the responsibility taken by Bangladesh for the Rohingya people.

Finally, Minister Çavuşoğlu attended the inauguration of the new service building of our Embassy in Dhaka.