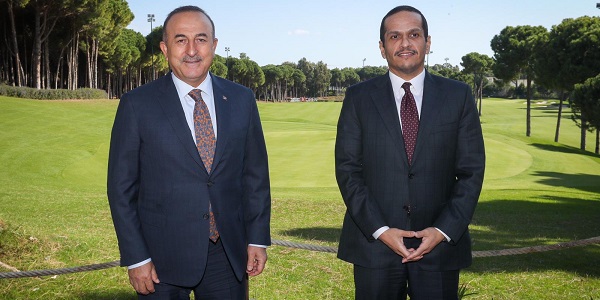 At the meeting, preparations for the 6th session of the Turkey-Qatar High Strategic Committee were discussed.

Minister Çavuşoğlu stated that they evaluated the steps to further strengthen our excellent relations and that they confirmed our understanding on regional and international issues.

Later Minister Çavuşoğlu met with Deputy Prime Minister Besnik Tahiri of Kosovo, who was in Antalya within the framework of South East European Cooperation Process (SEECP) Informal Foreign Ministerial Meeting to be held the following day.

During the meeting, bilateral and regional issues were discussed.

Minister Çavuşoğlu noted that we shared the feelings of brotherly Kosovar people, that we were confident that justice would be done, and that we would continue our support to brotherly Kosovo.

On the same day Minister Çavuşoğlu also met with Foreign Minister Nikola Selakovic of Serbia and congratulated him again for his appointment.

Minister Çavuşoğlu expressed that preparations of the 3. High Level Cooperation Council were discussed, and underlined that we would further develop our cooperation in economy, transportation and education.