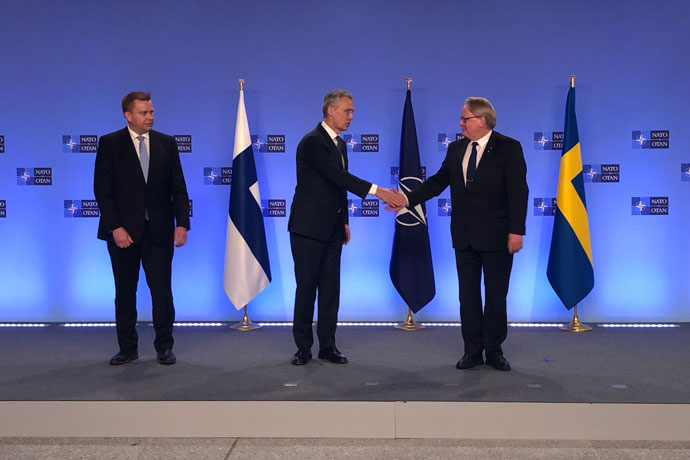 The war in Ukraine prompted the NATO defence ministers to gather in Brussels on 16 March for an extraordinary meeting. A representative for the European External Action Service and the defence ministers from NATO partner countries Ukraine, Georgia, Finland and Sweden also took part in the meeting.

The main focus of the meeting was how EU, NATO and NATO partner countries can cooperate further to manage the rapidly deteriorating security situation in Europe.

While addressing the meeting, Sweden’s Minister for Defence Peter Hultqvist highlighted the Swedish Government’s three-track approach in response to Russia’s invasion of Ukraine: sanctions against the Russian regime, support to Ukraine and measures to strengthen Sweden.

Mr Hultqvist also mentioned that, in response to Russia’s invasion of Ukraine on 24 February, Sweden’s cooperation with NATO has deepened, with improved exchange of information and coordination of activities and strategic communication.

“Cooperation between countries is crucial for security and stability in our neighbourhood. Sweden’s strengthened partnership with NATO is incredibly important given the worsening security situation.”

In conjunction with the NATO ministerial meeting, Mr Hultqvist had separate meetings with General Tod D. Wolters, NATO’s Supreme Allied Commander Europe, and British Secretary of State for Defence Ben Wallace, as well as a meeting with NATO Secretary General Jens Stoltenberg together with Finland’s Minister of Defence Antti Kaikkonen.

EU dependence on imported Russian energy must be broken