The meeting was held on the sidelines of the Eurasian Intergovernmental Council meeting. 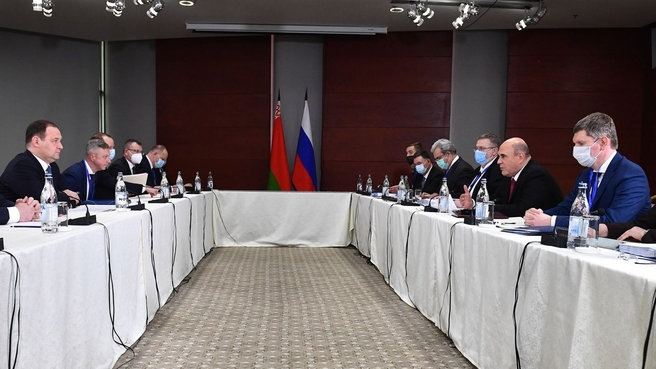 Excerpt from the transcript:

Mikhail Mishustin: Welcome, Mr Golovchenko. First of all, I would like to use this
occasion to convey the warmest regards from President of Russia Vladimir Putin
and from me personally to President of Belarus Alexander Lukashenko. We value
our fraternal and friendly relations with Belarus and consider it important to bring
them to an even higher level, as well as to strengthen integration in the Union
State, on which we have focused a lot throughout the past year, and, of course,
to launch new integration projects on a wide spectrum of our entire mutual
agenda. This fully meets the interests of the Russians, Belarussians, all the
people living in the Union State and will make it possible to form a common
economic and social space in the Union State.

During the upcoming period, it is necessary to focus our efforts on the
joint streamlining of integration documents based on the adopted action plan on
the union programmes, and also to stick to the deadlines and stages envisaged
there, on developing draft regulatory legal acts, international or interstate
treaties. The Russian government has already started working in this direction.
I hope that this suits our Belarusian partners. I know how active you have also
been in doing this.

Speaking about Russian-Belarusian trade and economic cooperation, I believe
it is developing successfully, in general. Mutual trade is growing steadily. In
January – September, it increased almost 38 percent compared with the same
period in 2020, amounting to $27.5 billion. At the end of the year, we will
reach indicators that exceed the pre-crisis levels.

The largest joint high-tech project, Belarusian Nuclear Power Plant, is
being implemented successfully. The first power unit was launched in June. The plant
is already generating almost one fourth of all the electricity produced in
Belarus. The scientific and technological base created as part of this project also
provides new opportunities for such cooperation in other fields related to the
peaceful atom.

We continue to counter the coronavirus pandemic together as well. We are
promptly providing Russian vaccines. We also welcome the launch of the industrial
manufacture of the Russian Sputnik V vaccine at Belmedpreparaty in Minsk and
Belvitunipharm in Vitebsk.

Regular flights between Russia and Belarus have been fully restored. Our
people can now fly to all open airports, including for international flights,
without restrictions. We have also increased the frequency of railway trains.

We are trying to promote contacts between our people as much as possible,
as well as to strengthen cooperation in education, science, and culture. We
have approved a significant programme of cultural and educational exchanges. Obviously,
we are doing this in compliance with the coronavirus restrictions.

Of course, we provide support in relieving the outcome of the illegal
unilateral economic sanctions imposed on Belarus.

I suggest we discuss these topics on our mutual agenda, as well as EAEU
issues.

Please, Mr Golovchenko, you have the floor.

Roman Golovchenko: Thank you Mr
Mishustin. I am happy to meet with you on the sidelines of our
intergovernmental council meeting and to take advantage of this opportunity to
compare notes again on all topical issues on the bilateral agenda.

I share your opinion in full
that following the approval by our two presidents of the package of Union State
programmes, we will develop a clear system for implementing all the agreements,
the way we pledged in the presence of the two heads of state.

We are cooperating closely on
all issues and we have tools to monitor progress in implementing the Union
State programmes. According to my information, almost all action plans for
carrying out these programmes have been signed, except one that has to do with
the communications market, if I am not mistaken. There is also an action plan
[that remains unsigned] pending approval by Russia.

Mikhail Mishustin: As far as
we know, it has been signed and sent to you.

Roman Golovchenko: So, we can assume
that all action plans have been approved. Relevant executives have been
assigned by the two sides to do the job. They are cooperating closely and, most
importantly, they are committed to achieving good results.

As we agreed, we will see to
it that there is managerial pressure to help us resolve all pressing issues,
which are likely to arise. This is perfectly clear.

You have correctly described
the status of our cooperation in trade and the economy, so I will not repeat
it.

It is important that we not
only focus on the Union State programmes but also give a new lease of life to joint
economic projects that are being carried out by Russian and Belarusian
businesses. It is very important that, in addition to the legislating we are
doing, we identify economic projects that involve businesses from our two
countries and that help strengthen our countries’ economic potential. This
refers to both import substitution programmes and manufacturing new science,
technology and industrial products. This concerns the economic security of
Russia, Belarus and the Union State.