Meeting of the SCO Heads of Government Council

Mikhail Mishustin took part in a meeting of the Heads of Government Council of the Shanghai Cooperation Organisation via videoconference.

Heads of
delegations of the Shanghai Cooperation Organisation member states:

Minister
of External Affairs of the Republic of India Subrahmanyam Jaishankar

Prime Minister of the Republic of Kazakhstan
Askar Mamin

Prime Minister of the Republic of Uzbekistan
Abdulla Aripov 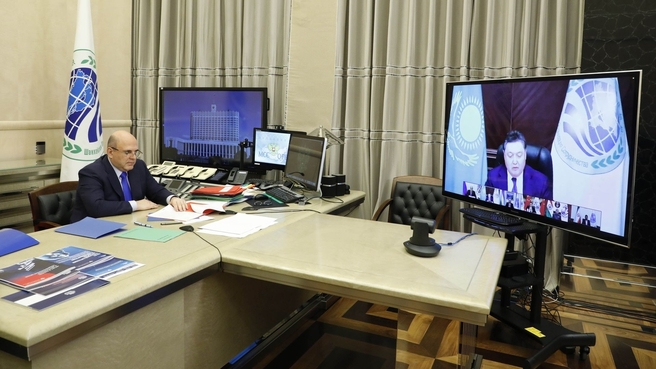 Meeting of the SCO Heads of Government Council

I would
like to join you in expressing gratitude to our Kazakh partners for the excellent
preparation of this meeting.

The
Shanghai Cooperation Organisation marks its 20th anniversary this year. In such
a short period – short by international associations’ standards – the SCO has evolved
as an effective format for interaction among Eurasian states, resolving regional
issues, and aligning national development strategies. For this purpose, it has
developed a solid regulatory framework covering a wide variety of fields from
politics and the economy to security and humanitarian ties. Our states are
consistently deepening cooperation, implementing mutually beneficial
cross-border economic and investment projects and promoting significant
multilateral initiatives.

At the
September summit in Dushanbe, the leaders of our states identified the
priorities for further strengthening this organisation. Much work remains to be
done to implement the agreements reached at the highest level.

Over the
past few years, the world has faced profound, system-wide changes. The
coronavirus pandemic has led to a downturn in key sectors of the global economy,
pushing up unemployment. International value chains have been disrupted, and
trade and investment have shrunk.

The
external market environment is not exactly favourable either. Our Western
partners often use unfair competition strategies to keep their dominant
positions. Protectionist measures and illegal unilateral sanctions are
expanding.

Regional
conflicts are also escalating. The situation in Afghanistan, which is struggling
with an acute socioeconomic crisis, raises serious concern. It is important to
prevent that country, which is close to all of us, from sliding into a
humanitarian catastrophe. Following President Vladimir Putin instructions, we have
dispatched the first batch of humanitarian aid to Afghanistan. Other SCO states
are also providing support to the Afghan people.

It is in
our common interests to ensure the peace, sovereignty and territorial integrity
of the Afghan state, freeing it from terrorism and drugs. It is essential for
the safe and stable development of our entire region. However, undoubtedly, the
main responsibility for post-conflict reconstruction should be borne by those
countries whose actions led to the present tragedy.

More to be posted soon…

Previous articleAmendments to the entry ban for people travelling to Sweden from certain countries outside the EU/EEA and extended ban on entry to Sweden from countries within the EU/EEA
Next articleDrowning of 27 migrants in English Channel is worst disaster on record: IOM