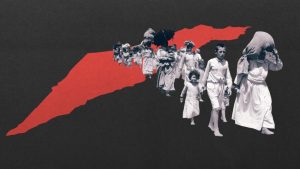 Press Release by the Ministry of Foreign Affairs

Palestinians commemorate today the 73rd anniversary of their Nakba when Zionist gangs committed horrible massacres and drove 750,000 Palestinians out of their ancestral lands, where they lived for thousands of years.

Back then, the international community stood by watching the suffering of our people, and for 73 years, it was unable to restore our rights or stop the aggression of “Israel” on our land and holy places.

Today, nothing has changed as the machine of death and destruction still abuses the rights of Palestinians everywhere, while the international community is still silent and helpless.

This morning, Saturday, May 15, 2021, “Israeli” warplanes have bombed a residential house in Al-Shati’ camp, one of the most crowded places in the world where 100,000 people live in just one square kilometer.

This barbaric attack wasn’t preceded with any warning, and caused the death of 10 civilians (8 children and 2 women), while a number of people are still missing under the rubble until this very moment.

This was not the only massacre of the kind. The “Israeli” attacks against residential homes have wiped out 12 Palestinian families entirely and caused the death of 139 people, including 39 children and 22 women.

This Afternoon, “Israeli” warplanes have bombed Al-Jala tower, a civilian building that contains offices of the most popular media agencies, like Al-Jazeera and Associated Press, besides offices of lawyers, doctors, and residential apartments.

As a result of this ongoing aggression, 20,000 Palestinian have left their homes towards the schools of UNRWA in a painful scene that brings back the memories of Nakba.

The barbaric aggression was not limited to Gaza but included the whole of Palestine. In Al-Sheikh Jarrah, gangs of extremist settlers have opened fire on the defenseless residents. In the meantime, “Israeli” police have done nothing to stop these serious crimes or arrest its perpetrators.

In the territories of 1948, extremist right-wingers have set the homes of Arabs on fire. A state of panic and fear has ensued the incident, while a number of kids have suffered severe burns.

In the West Bank, the “Israeli Army” used live ammunition to disperse the peaceful demonstrations which erupted in solidarity with Gaza. Therefore, 12 protesters were killed and dozens were wounded.

Moreover, “Israeli” tanks targeted with heavy fire the Lebanese demonstrators, who protested on the borders, and killed a Lebanese protester.

Regarding all these heinous crimes, we ask the international community: Does self-defense apply to the murder of sleeping children in their homes? Does it justify the bombing of residential areas and the killing of peaceful protesters? Does it grant the right to use excessive and disproportionate force?

Under these horrible crimes, combined with the lack of justice and the international silence, the Palestinian people have no choice but to practice their natural right to self-defense until liberation, self-determination, and the establishment of an independent state, like the rest of nations.