“This meeting seeks to, therefore, accelerate action to avert the environmental crisis and define a pathway towards an environmentally sustainable future,” the President said.
Speaking at the opening of the international environment meeting on 2 June 2022, President Uhuru Kenyatta urged the international community to accelerate actions to avert the environmental threats facing the world.
STOCKHOLM, Sweden, 4 June 2022 (MFA Press) – His Excellency Uhuru Kenyatta, President of the Republic of Kenya with his host Her Excellency Magdalena Andersson, Prime Minister of Sweden, co-chaired the two-day international environment meeting dubbed Stockholm+50 held in Sweden from 2 and 3 June 2022.
The meeting co-hosted by Kenya and Sweden concluded on 3 June 2022 with a call for firm commitment to urgently address global environmental concerns and for a just transition to sustainable economies that work for all people.
He noted that UNEA-5.2 held in Nairobi early this year underscored the urgency for collective action to address the triple planetary crisis of climate change, pollution and biodiversity loss, the President appealed to all UNEP member states to develop and implement a legally binding instrument to end plastic pollution.
At the same time, President Kenyatta called on development partners to honour their commitments of doubling global climate financing, especially for adaptation, to enable developing countries to invest in climate-resilient infrastructure and systems.
He said the heightened ambition in financing and implementation should be at the core of the environmental commitments and actions.
On the sidelines of the international meeting, President Kenyatta held bitaleral talks with Swedish Prime Minister Magdalena Andersson, Botswana President Mokgweetsi Masisi and the President of the 76th session of the UN General Assembly, Abdulla Shahid.
Other speakers included Presidents Mokgweetsi Masisi (Botswana), Azali Assoumani (Comoros), Mohamed al-Menfi (Libya) and Collen Kelapile (UN Economic and Social Council) as well as UNEP Executive Director Inger Andersen who also secured as Secretary-General for the Stockholm+50 meeting.
Recognizing the critical role of UNEP as the premier institution on environmental matters, the President informed the meeting that the Kenya Government has continued to provide strong financial and logistical support to the UNEP global office in Nairobi.
His Majesty King Carl XVI Gustaf of Sweden, United Nations (UN) Secretary-General Antonio Guterres and the President of the 76th session of the UN General Assembly, Abdulla Shahid, also addressed the opening session of the two-day Stockholm+50 meeting convened by the United Nations and was attended by over 3000 participants from around the world. 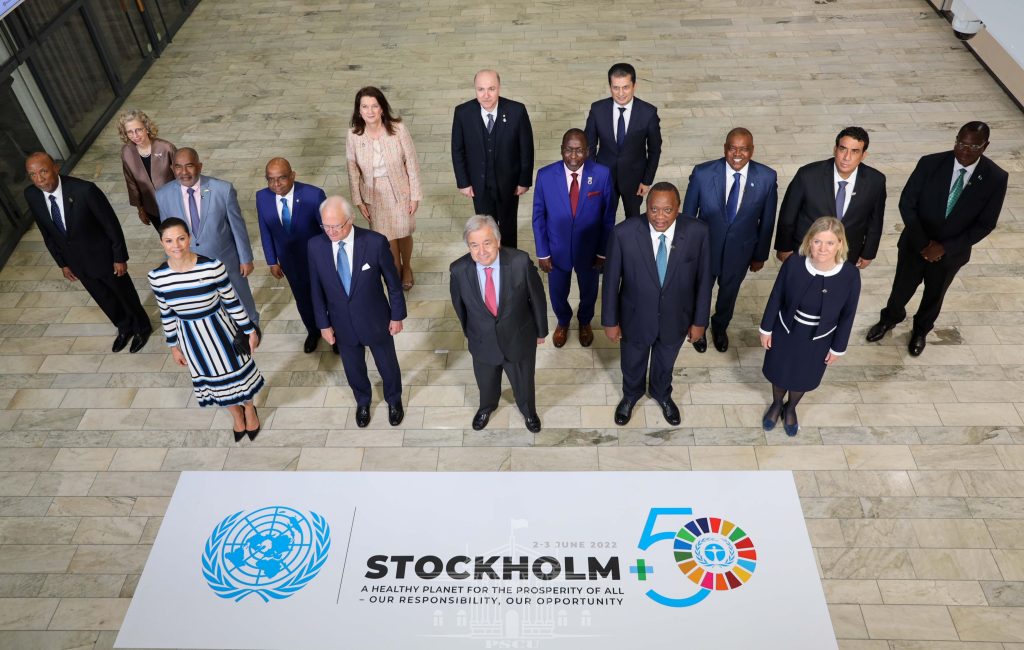 The President noted that less progress has been made in designing and implementing bold actions to address the environmental threats in the last 50 years. He tasked all participants to seize the opportunity presented by the Stockholm+50 meeting to hasten the pace and quality of the environmental action whose agenda is currently at the center of global discussions.
“By the time we head to COP27, we should aim to have developed a comprehensive, holistic and transformative package of environmental actions.  One that pulls together the outcomes of COP26, UNEA5.2, Stockholm+50 – where we are today, and the upcoming UN Ocean Conference, in Lisbon,” President Kenyatta stated.
The President also presided over the high-level side event dubbed “on the Road to Lisbon” moderated by Foreign Affairs Principal Secretary Amb. Macharia Kamau and acts as a build-up engagement to mobilize participation and enhance awareness of the 2nd UN Oceans Conference that Kenya and Portugal will co-host in Lisbon from 27 June – 1 July 2022.
President Kenyatta said his administration has continued to give high priority to environmental issues. This includes the ban on single-use plastics in 2017 and the acceleration of the generation of renewable energy, which now accounts for approximately 80 percent of Kenya’s energy. June 14, 2022