She also spoke about other matters including trade, the impact of the war in Ukraine, programmes supported by the EU as well as access to visas.
The Minister use the opportunity to underscore the great importance Jamaica attaches to its relationship with the European Union (EU), noting the country’s commitment to further strengthening relations with the EU within the framework of the new OACPS-EU Partnership Agreement.
Photo Caption: Ahead of the Jamaica/EU 6th Political Dialogue on Wednesday, July 20, Foreign Affairs Minister, Senator the Honourable Kamina Johnson Smith today (July 19) met with Ms. Myriam Ferram, Deputy Director for International Partnerships at the European Commission & Mr. Javier Nino Perez, Deputy Managing Director for the Americas in the European External Action Service and other members of the delegation.
With respect to the signing of the Post Contonou Agreement, the Minister stated that Jamaica remains committed to playing its part in the process. 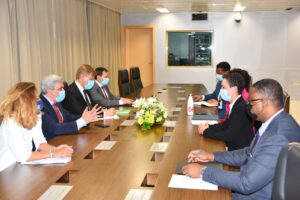