Caption: “This morning’s flag-raising is an emotional reminder of the occasion sixty years ago when our first Prime Minister, Sir Alexander Bustamante, witnessed the hoisting at the United Nations Headquarters, of the black, green and gold.  That very act, the raising of our flag, simultaneously elevated the hopes and aspirations of a small, island country, entering the global arena, with outsized vision for its mission…. Today, in that same spirit of optimism, Jamaica reaffirms its commitment to the vision and work of the United Nations, and its adherence to #Multilateralism as a core principle of its foreign policy. …We continue our legacy of leadership at the United Nations in areas which reflect the progression in focus over time, to embrace the new endeavours of the international community.”- Minister of Foreign Affairs and Foreign Trade, Sen. The Hon. Kamina Johnson Smith, at this morning’s Flag Raising Ceremony to mark UN Day 2022 at the Headquarters of the International Seabed Authority (ISA). 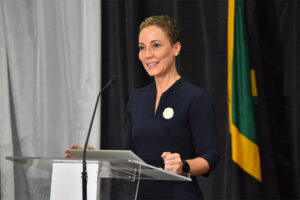 Also speaking at the ceremony was Dr. Garry Conille, Resident Coordinator, United Nations, Jamaica. He said: “Jamaica is played an outstanding role at the UN and in 60 years, has been serving with distinction in senior UN positions and providing exemplary leadership in over 40 UN Organisations. When Jamaica gets involved they get things done, and for that we are grateful.