Jamaica, proud of its contribution to the elaboration and adoption of the Montego Bay Convention

Caption: For Jamaica, the Montego Bay Convention is one of the first, and few instances, in which the interests of humanity have been elevated above State sovereignty and codified in international law. Jamaica is extremely proud of its contribution to the elaboration and eventual adoption of the Montego Bay Convention… and of our historical leadership, along with others, in strengthening the rule of the law of the sea.”- Foreign Minister, Sen. The Hon. Kamina Johnson Smith at the Special Commemorative Session for the 40th Anniversary of the Adoption of the United Nations Convention on the Law of the Sea (“the Montego Bay Convention”), August 1, Knutsford Court Hotel. Minister Johnson Smith also asserted Jamaica’s support for the precautionary principle and stated that: ”While Jamaica continues to attach significant importance to the full and effective implementation of UNCLOS, I wish to confirm that in keeping with the thrust of our deliberations, our support of deep seabed mining can only be subject to an appropriate, robust regulatory framework.” Minister continued ” We insist that finalization of the Regulations on Exploitation of Mineral Resources in the Area must be the product of a diligent, inclusive and measured process of deliberations and consultations, which should never be rushed to accommodate particular state interests.” 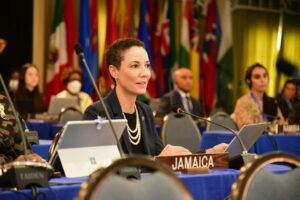