Caption: “Perhaps our strongest alliance has been our people-to-people connections – the hundreds of thousands of Jamaicans and people of Jamaican descent, including from the Windrush era, who continue to support the growth and development of the UK, as well as Jamaica.” Sen. the Hon. Leslie Campbell, State Minister, Ministry of Foreign Affairs and Foreign Trade (MFAFT), during the exchange of Commemorative Letters in observation of Jamaica/UK 60th Anniversary of Diplomatic Relations, with Sen. the Right Hon. Jesse Norman, Minister of State, Foreign, Commonwealth and Development Office, UK, at the Ministry’s Downtown, Kingston HQ on Tuesday, October 25. 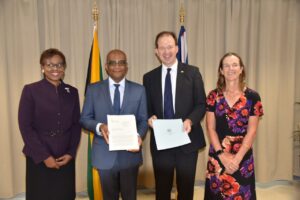 For his part, the UK State Minister noted that “Jamaica’s global influence belies its small size. He also listed  policy reform, public sector modernization, climate change and security as some of the areas of longstanding UK/JA cooperation.