India is the second-largest producer of Raw Cashew Nuts in the world: Shri Tomar

Strategic planning should be done to enhance Cashew’s export instead of its import: Shri Tomar

Shri Tomar underlined the cultivation of cashew in around 11.25 Lakh ha area having an annual production of 7 Lakh Tonnes. He stated that the area under cashew in the country is the second-largest in the world. Shri Tomar accentuated that India is the second-largest country in the production of raw cashew nuts in the world. Highlighting the ever-increasing consumption of cashew in the country, he also stressed the need for setting a goal to fill up the gap between its production and consumption. To adopt the ways for strategic planning to enhance the export of cashew instead of its import was also emphasized by Shri Tomar. 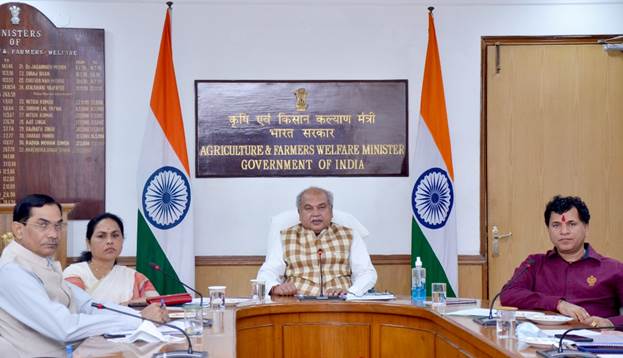 The Chief Guest of the occasion, the Union Minister highlighted the Prime Minister, Shri Narendra Modi’s visions of “Aatma Nirbhar Bharat” and “New India”. Applauding the efforts of the agricultural and farming fraternity that have led the country to be self-dependent and self-reliant in the production of the various avenues of agriculture, Shri Tomar urged for working together to strengthen the country. The unparallel contributions of the Council and its Institutes Pan India in strengthening the agricultural sector of the country were applauded by the Union Minister. He also asserted on the dedication of the agricultural scientists to ensure the enhancement in the production and quality of the various crops that have yielded visible results.

“There is a need to enhance the cashew’s production and its productivity by bringing more area under the cashew cultivation”, stressed Shri Tomar. He urged for exploring the possible suitable areas for its expansion. The release of 26 varieties, the development of Virtual Software and the Mobile App “Kaju India” by the ICAR-DCR, Puttur for apprising the farmers about the latest developed varieties and technologies were underlined by the Union Minister. The large scale employment opportunities generated by the Cashew Processing, which involves around 95% farmers along with the Cashew Processing Units providing employment to about 15 Lakh people was highlighted by Shri Tomar.

The Union Minister regarded the New Silver Jubilee Building as a new dimension in the Council’s vision of empowering and benefiting the agricultural community which will help in advancing the research on the Cashew crop. He stated about the Council’s efforts of enabling the farmers to connect with it through technological advancements. This, he said, is beneficial to a large extent for the farmers.

Shri Tomar urged the scientists for providing prompt and timely solutions to the various problems faced by the farmers. Asserting the Government of India’s commitment to enhance the farmers’ income, the Union Minister highlighted the various Schemes like – Fasal Bima Yojana, Rs. 1 Lakh Crores Fund for Infrastructure, development of 10,000 Farmers’ Producers’ Organizations (FPOs) and Kisan Credit Cards for Farmers, etc., that are aimed at benefiting the agricultural community to a larger extent.

The Guest of Honor, Shri Kailash Choudhary, Union Minister of State for Agriculture & Farmers’ Welfare accentuated on the need for enhancing the production and cultivation area of Cashew Nuts in line with the vision of the PM. The Minister also emphasized on benefiting the Cashew Farmers under the Central Government’s “Lab-to-Land” Scheme and disseminating the Cashew’s new varieties to the maximum number of farmers.

The Special Guest, Km. Shobha Karandlaje, Union Minister of State for Agriculture & Farmers’ Welfare emphasized on providing prompt solutions to the Cashew Farmers by finding out the particular problems. “More productive Cashew crops should be developed by carrying out the extensive research in the area of Cashew Nuts Farming”, urged the Minister.

The need for reducing the Cashew Crop’s imports and its popularization in other areas too was stressed by Dr. Trilochan Mohapatra, Secretary (DARE) & Director General (ICAR).

Read this release in: Hindi