Government plans to organise skill upgradation, better marketing skills and training for tribals so that they can tap the full potential of their products: Sh Arjun Munda 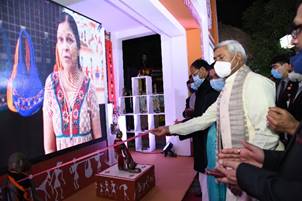 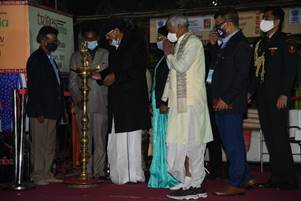 Shri M. Venkaiah Naidu formally inaugurated the festival by lighting the traditional lamp. Speaking on the occasion, Shri M. Venkaiah Naidu called for a model of development that preserves the special identity of tribals. “Their culture is their identity”, he said and wanted this culture to remain intact, while drawing the Adivasis into the mainstream. Taking note of the wide range of tribal handicrafts, the Vice President emphasized the need to channelize the natural skills of tribal people to promote and popularize their products and improve their sources of income. He appreciated the Government for promoting interaction between the tribal artisans and the mainstream designers from reputed organizations. The synergy between these two can generate marketable products of art and handicraft for the top-end global market and added that it would be a win-win situation for the both, he said. He praised the Tribal Cooperative Marketing Development Federation of India (TRIFED) , M/o Tribal Affairs  for doing significant work for economic empowerment of tribal communities including the promotion of e-commerce and digital platforms to take the business forward. Shri Naidu also said that the demand for organic food products is growing and TRIFED must tap this niche market. He wanted the TRIFED to ensure that the benefit of higher prices reaches the tribal population. 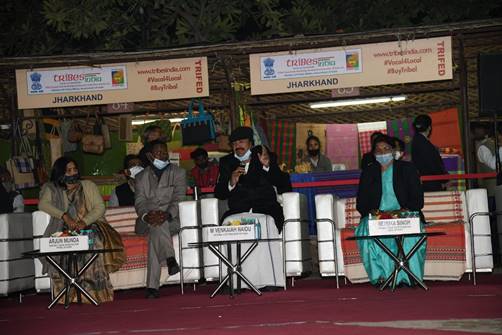 Presiding over the function, Shri Arjun Munda, Minister for Tribal Affairs commended the efforts of the Ministry and TRIFED for striving continuously towards the empowerment of tribals. He said, “This annual festival showcases traditional art and handicrafts and cultural heritage of the country and connects the tribal artisans with larger markets. This even brings to focus the diversity and richness of the tribes of India.” The Minister said that the government is making tremendous efforts to popularise tribal products and offer them opportunities for connecting with national and international markets. He especially highlighted “honey” produced by tribals which he said has all natural medicinal properties. Sh Arjun Munda also highlighted another great quality of tribal products which are organic in origin.He also said that the government  has plans to organise skill upgradation, better marketing skills and training for tribals so that they can tap the full potential of their products. He appealed to the people to visit the festival and enjoy the tribal culture, cuisines and artefacts.

The Aadi Mahotsav is an annual event that was started in 2017. The festival is an attempt to familiarise people with the rich and diverse craft, culture of tribal communities across the country, at one place. However, due to the pandemic, the 2020 edition of the festival could not be held.

The theme of the festival is “A Celebration of the Spirit of Tribal Crafts, Culture and Commerce”, which represents the basic ethos of tribal life.  The fortnight-long festival will feature the exhibition-cum-sale of tribal handicrafts, art, paintings, fabric, jewellery and much more through 200 stalls to showcase this.  About 1000 tribal artisans and artists from across the country are participating in the festival.

Shri Pravir Krishna, Managing Director, TRIFED added, “Acclaimed artists and artisans, drawn from as many as 20 states of the country, including Chhattisgarh, Madhya Pradesh (MP), Odisha, Himachal Pradesh, Jammu & Kashmir, Rajasthan, Gujarat, Andhra Pradesh, Karnataka, West Bengal and North-East states will be a part of this mega cultural razzmatazz and will showcase their traditional art, craft and culture.”

The highlight of the event is the variety of tribal handicrafts, tribal natural products, tribal cuisine and culture on display. Visitors can sample the best that tribal India has to offer – from the famed Maheshwari sarees of Madhya Pradesh to the warm woollens from Ladakh and Himachal Pradesh, from the various immunity boosting herbs and spices procured by the tribals of Tamil Nadu to the special honey and organic produce from North-east India; from the reputed Toda embroidery to the moga silk from Assam and the black pottery from Nagaland. The festival is a conglomeration of a mini-India, all under one roof at one place!

Mesmerizing performances by tribals from across the country can also be viewed while enjoying exquisite tribal dishes from different parts of the country such as Dal Pitha, Dhooska, Chilka roti from Jharkhand, Gurudi, Jowar papad and roti on Mahalpatta from Maharashtra, and Samai urundai, Ragi kali and Thenai rice preparations from Tamil Nadu and pork dishes from Nagaland. The focus of the festival is to showcase the rich tribal cultural diversity, through its products, handicrafts, and art forms like-never-seen-before.

With the emphasis of the PM on Vocal for local and building a self-reliant India, the festival aims to bring to fore the rich artforms and traditions of this most disadvantaged section of Indian society and help them get access to larger markets.

TRIFED, as the nodal agency working towards tribal empowerment, has been putting in place several initiatives that help in improving the income and livelihoodof the tribal people, while preserving their way of life and tradition. The Aadi Mahotsav is one such initiative that helps enable the economic welfare of these communities and bring them closer towards mainstream development. 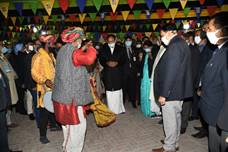 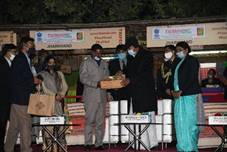 Centre declares Soya Meal as an Essential Commodity up to 30th...