Minister of Foreign Affairs Nikos Dendias’ statements to journalists following his meeting with the Foreign Minister of the Republic of Cyprus, Ioannis Kasoulides on the sidelines of the United Nations General Assembly (New York, 19.09.2022) 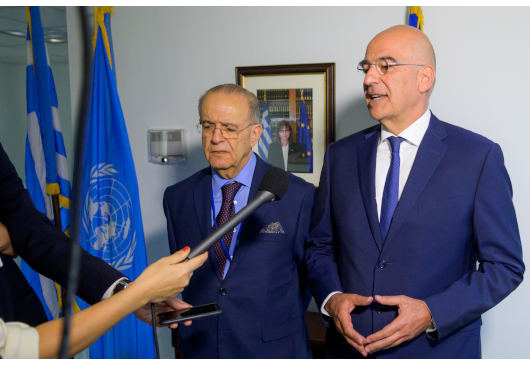 First of all, it is great pleasure to welcome here in New York, at Greece’s Permanent Mission to the UN, the Minister of Foreign Affairs of the Republic of Cyprus, Ioannis Kasoulides, ahead of the United Nations General Assembly which begins today.
In this regard, together we had the opportunity to have a trilateral meeting with the Foreign Minister of Armenia. He gave us an analysis of what is happening in the South Caucasus, and we had the opportunity to jointly express our firm position in favour of Armenia’s independence and territorial integrity.
N. DENDIAS:  I will have more than 30 contacts, and considering the large number of contacts Prime Minister Mitsotakis will have when he arrives in New York tomorrow, I think we will have more than 40-45 meetings in total. I believe it is a fantastic opportunity not only to deepen our existing relations, but also to highlight to all our interlocutors Greece’s constructive role in its wider region – both in the Balkans and in the Eastern Mediterranean; and, of course, to promote the major national issue of Cyprus.
JOURNALIST: Any comment regarding the contacts you will have?
It is customary but also very useful for us to coordinate each time and talk about the meetings we are scheduled to have and the efforts we can jointly make.
Greece and Cyprus always stand shoulder to shoulder sharing one axis and one common gospel: our adherence to International Law, to the rights of independence and territorial integrity of all states, and, of course, to the International Law of the Sea.
We will oppose any form of revisionism, no matter where it comes from or which country it stems from – as well as any attempt to use the energy situation as a weapon against certain states and effect changes on the ground.
I would like to take this opportunity to express Greece’s strongest satisfaction with the lifting of the arms embargo on the Republic of Cyprus. I believe that thanks are also due to US Secretary of State Antony Blinken, but also to Senators Menendez and Rubio. However, I’d like to say that this actually constitutes a reward for the consistent stance of the Republic of Cyprus over the years, and the new perception of total solidarity against all forms of aggression.