This is clearly mentioned in the Strategic Concept proposed by the Secretary-General and adopted at the Madrid Summit. And the institutions of our Alliance, of NATO, starting with its leadership, with the Secretary-General, must both respect and honour all Alliance members as well its principles.
These are the key points of our rhetoric. And we believe that NATO is an alliance that takes exactly the same approach; it is an alliance of sovereign states, but also an alliance of principles, such as the ones I just mentioned.
Nothing can or should go unpunished. Aside from that, we are quite sensitive as regards Mariupol, a city that has been destroyed and in which more than 100,000 Greeks used to live.
My dear Edgars, thank you very much for being here with us today; it was a great pleasure to welcome you.
We have discussed sanctions; I believe, we agree that there must be a solid front among us; the European Union’s unity is a top priority. I also emphasized that the countries that do not impose sanctions give Russian aggression breathing space.
I’d like to emphasize that the largest Russian foreign investment at the moment is the Akkuyu nuclear power plant in Turkey and that Russia and Turkey appear to have adopted similar models of behaviour in specific areas, with the promotion of revisionism, that is, the promotion of a model of border change that has nothing to do with the perception of the international legality and the European Union.
Indeed, we are celebrating a century, a hundred years of diplomatic relations this year. Your visit follows President of the Republic, Ms. Sakellaropoulou’s visit, to Riga in June, while you haven’t been to Athens for four years.Yesterday’s post by the NATO Allied Land Command deviates from these principles. Greece has significantly contributed to NATO over the past decades and does not accept this behaviour. I’d like to express my satisfaction because following our demarche yesterday, NATO took corrective action. 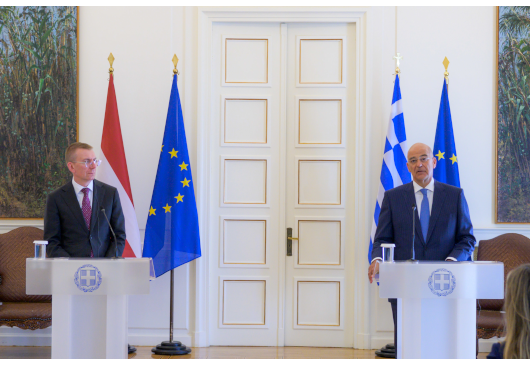 My dear Edgars,
I’m planning to visit Riga again. I came last December, but not on a bilateral level. But I have to say that only ten months have passed since I was in Riga but the world is not the same; it has changed dramatically due to the Russian invasion of Ukraine.
We also discussed and will continue to do so at lunch what Greece has done in Ukraine. I said that I’d hand you a relevant memorandum on this, but I’d like to state publicly that we have also taken a clear position on accountability for any war crimes committed.
In this period, we have achieved a great deal in terms of political dialogue, educational relations, and even the teaching of the Greek language at the University of Riga, which is a very pleasant thing for us. This does not mean, however, that there isn’t still a great deal of room for deepening and improving our cooperation.
We, for one, will not engage in a rhetoric of reviving the past. As a European democracy, we look ahead into the future. Because what matters to us are human rights, women’s rights, democracy, and International Law.
I also emphasized the importance of NATO’s cohesion, as I did with the European Union. At this stage, cohesion within the Alliance is more important than ever.
Αt this point, my dear Edgars, I would like to open a parenthesis: the last Soviet leader, Mikhail Gorbachev, passed away the day before yesterday. Mikhail Gorbachev is remembered for his contribution to bringing the Cold War to a peaceful conclusion and for his efforts toward nuclear disarmament.
But I don’t want us to forget that perestroika had dark sides as well and we in Greece will never forget the suppression of the independence movements in the Baltic countries, in Azerbaijan and Georgia.
So today we examined in depth the developments in Eastern Europe. We examined what is happening, as well as the consequences of the Russian invasion, and I want to say that both Greece and Latvia have taken a principled stance on the issue of the Russian invasion, based on full respect for International Law, full respect for the territorial integrity and sovereignty of all the countries of the world. As democracy, the Rule of Law and the protection of human rights constitute the core of the European Union, the family of which we are both members.
Furthermore, I’d like to emphasize that Turkey’s rhetoric against Greece on the occasion of the 100th anniversary of the Asia Minor Catastrophe is completely inappropriate for an allied country.We also discussed our cooperation within the framework of the North Atlantic Alliance and in this regard, I had the opportunity to touch on some key points including the importance of the port of Alexandroupolis, which can be both a transit and an energy hub for the strengthening and protection of NATO’s eastern flank.
Firstly, at the level of mutual understanding of the challenges we face, but also in bilateral trade, innovation, energy, the economy, tourism, and culture.
I made mention of our neighbouring country, Turkey, which does not apply sanctions while during summer it also served as a haven for Russian oligarchs and Russian mega yachts, which we in Greece and Europe, in general, have banned.
I perceive this corrective action as a confirmation of the commitment to the above-mentioned principles. I’d like to conclude by returning to where I began: our bilateral relations that are turning 100 years old.
I am delighted to welcome you to Athens today. You are one of my two most experienced European counterparts and your views carry special weight in the Council of the EU. It is therefore a great pleasure to welcome you to Athens today.