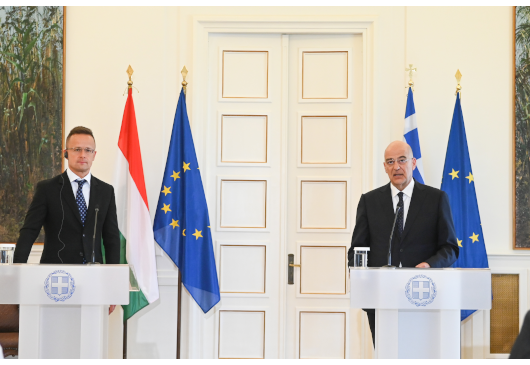 My dear Peter,
Unfortunately, however, we now live in a different world. We are experiencing unprecedented situations in Europe; the invasion of Ukraine, the nearly-four-month long war, have completely changed the geopolitical landscape.
I’d also like, if you don’t mind, to discuss the migration issue over lunch. I would like to thank you here, publicly, again, for Hungary’s contribution to FRONTEX, which has been deployed on the Greek border which is a European border as well.
Unfortunately, the update I am about to give you will not be very pleasant. We are witnessing an increase in the effort to instrumentalize the migration issue and a rhetoric escalation in this direction.
If we leave a gap, that will be exploited by other forces, centrifugal forces, which are looking forward to a different future for our region, for Europe, for the Western Balkans.
We also discussed Greece’s efforts, which is now becoming an energy hub from which natural gas can be transported to our wider region in the Balkans, to South-Eastern Europe, to Central Europe, and I assured you that it is our objective to connect this network with Central and Eastern Europe. The LNG plants, both the existing one in Revithoussa and the one under construction in Alexandroupolis, will contribute significantly in this regard, and so will the interconnectors, the TAP and the IGB, which is expected to start operating very soon.
First of all, we are witnessing an attempt to challenge Greek sovereignty at the level of rhetoric; an attempt to tarnish Greece’s image, but unfortunately also an attempt to challenge it on the ground, with overflights over Greek territory and violations of Greek airspace and territorial waters.
Afterwards, we will also discuss the food crisis that the war has created. Allow me to inform you of the situation countries in our immediate neighbourhood, such as Egypt, face. We met our colleague, Sameh Shoukry, at the Foreign Affairs Council just a few days ago.
I also assured you that although we are responding to all of the illegal and unilateral Turkish claims, we will continue to operate in a calm manner at all times, based solely on respect for International Law and the Law of the Sea, and we will not be drawn into rhetorical confrontations.
This has had an impact on the quality of life of the citizens of our countries and, of course, as far as we are concerned, the Mitsotakis Government has taken a number of measures to try to relieve Greek consumers.
This is an issue on which our positions are particularly convergent. We are convinced, both Hungary and Greece, that a clear message of support must be sent to our region.
And we must not create a gap in this perspective of the Western Balkans, in their efforts to become part of our European family.
It is a great pleasure to welcome you back to Athens today, just a few months following your last visit here in October.
We must not forget the Western Balkans. The Western Balkans consist of countries that have made and continue to make efforts to join our European family.
Particularly at the present juncture, when attention has turned to other regions and other countries that wish to become official candidates for membership of the European Union.
We are asking our partners, our friends, for the obvious, what we declared immediately after the invasion of Ukraine, namely respect for the inviolability of borders and the sovereignty of all states, as well as respect for International Treaties.
And of course, we discussed something that is of particular interest to Hungary and to us during the tête-à-tête we had, and we will continue to do so at lunch, which is the European perspective of the Western Balkans.
First of all, we discussed extensively the issue of Europe’s energy security. The rise in energy prices has had an impact on both Greek and Hungarian society.
Lastly, I had the opportunity to inform you about the situation in Greek-Turkish relations and the escalation of Turkey’s provocative conduct in the Eastern Mediterranean.
However, of course, we cannot allow any country to insult us with false theories and fake news. And in this regard, we anticipate our partners’ solidarity.
Of course, in this context, we discussed several issues during our meeting and we will continue to do so at the working lunch that will follow.
But, my dear Peter, I’d like to conclude by saying that while there are always many issues to discuss, it is a great pleasure to welcome you to Athens and I especially thank you for the pleasure you’ve given me to be with us today.