Minister of Foreign Affairs Nikos Dendias’ statement following the signing of a Memorandum of Understanding by the Minister of National Defence Nikos Panagiotopoulos and his Egyptian counterpart Mohamed Zaki (Cairo, 22.11.2022)

The Agreement proves once again that the Mediterranean is not – and has never been – a barrier between Europe, Asia, and Africa. On the contrary, it serves as a bridge between the peoples of these three continents. Greece and Egypt continue to work on the basis of this philosophy, setting an example for other Mediterranean countries. 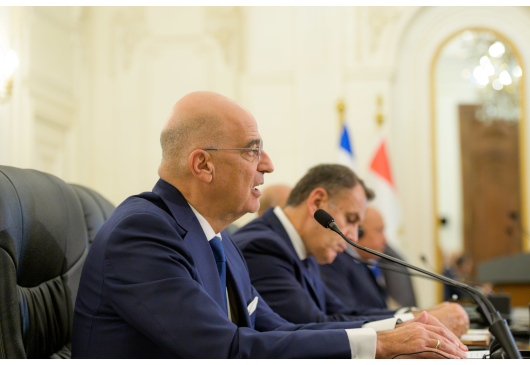 Minister of Foreign Affairs Nikos Dendias’ statement following the signing of the “Memorandum of Understanding on Cooperation in the Fields of Aeronautics and Maritime Search and Rescue” by the Minister of National Defence Nikos Panagiotopoulos and his Egyptian counterpart Mohamed Zaki (Cairo, 22.11.2022)
I would now like to give the floor to the Greek Minister of Defence, Nikos Panagiotopoulos, to speak about the Greek-Egyptian Agreement on Aeronautical and Maritime Search and Rescue.
Your Excellency, dear Minister, Your Excellencies, Ministers,
Immediately afterwards, an additional Agreement will be signed at the Egyptian Ministry of Foreign Affairs, by Alternate Minister of Foreign Affairs, Mr. Varvitsiotis. An agreement that will allow the transfer of necessary human resources for the Greek economy from the friendly country of Egypt.
Based also on respect for international legality as well as on the promotion of peace and stability in the Mediterranean and beyond. The significance of the Agreement lies in the fact that it aims to rescue human lives in danger, through cooperation between the competent authorities of the two countries. Greece and Egypt demonstrate their shared commitment to the supreme value of human life.
My pleasure today is even greater as I attended the signing of a bilateral Agreement in the fields of Aeronautical and Maritime Search and Rescue by the Greek and Egyptian Defence Ministers, Mr. Panagiotopoulos and Mr. Zaki. This Agreement provides a significant boost to our joint effort to further deepen bilateral relations and bilateral cooperation; with its main pillar being adherence to International Law, including the Law of the Sea, and the principles of the United Nations Charter.
It is with great pleasure that I once again return to Cairo. Today’s visit is the latest in a series of several visits I’ve made to Egypt and is part of a deep friendship between two strategic partners.