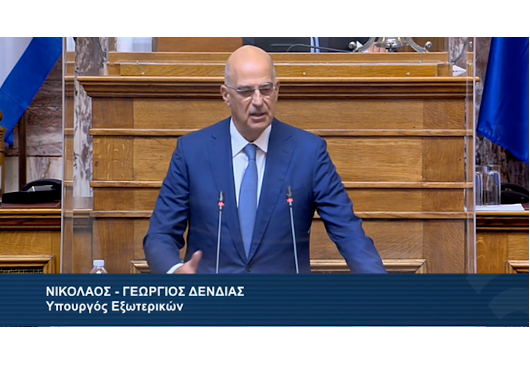 Thank you, Mr. President.  Ladies and Gentlemen MPs,
But I am saying that in particularly important cases, such as Ukraine, unanimity has been achieved. We have achieved unanimity and we must maintain it.
I am due to travel to Ukraine on October 6, and before me, the President of the Republic is due to visit Ukraine. He was also kind enough to remind us that I have actually been to Odessa twice and I also visited Ukraine shortly before the invasion.
So, I am telling you that the Turkish request to participate was rejected yesterday by the relevant committee at technical level in the Netherlands. We did not have to resort to a Greek veto, which could have been a possibility, because Turkey technically did not meet the requirements.
As regards the other question about abolishing unanimity -I think it was again Mr. Loverdos who asked the question- the Greek position is clear and has been stated: no, we are not ready.
We believe that by becoming members, they can contribute to the North Atlantic Alliance, and I’d like to state that Greek foreign policy, which has always been a principled policy, cannot enter into a bargaining logic in order to extract something. After all, that would make us look like our neighbouring country and I believe it wouldn’t do justice to our overall presence on the international stage.
As you are aware, -I have said that repeatedly- the building where the Greek Revolution began, where members of the Filiki Etairia met, is a property of ours.
You are also aware that, as we speak, a Ukrainian counteroffensive is underway in the Kherson region and in Eastern Ukraine. Of course, it is not in my capacity to inform you about that; I’m simply emphasizing it.
It is maintained by the Greek state. The relevant exhibits have now been stored in the basement. I note that there are letters from Pushkin, the great Russian poet, who attended meetings of the Filiki Etairia.
President Putin does not subscribe to Leninist internationalism. President Putin adheres to the concept of the ‘Russkiy Mir’, that is, the “Russian world”, which he stands for. If we had time, we could discuss where it comes from, what is happening, and what is the theoretical basis of this concept, which can in no way justify or explain the unacceptable invasion of Ukraine.
Aside from that, we have very close and friendly relations with both Finland and Sweden, two countries that are members of the European Union, with an excellent system for the protection of human rights, and remarkable armed forces.
Greece also believes in the need to reform the United Nations’ functioning as well as the United Nations Security Council. Greece is aware of the need for other important countries to participate in the United States Security Council.
As part of my response, I will just comment briefly on what has been said about the issue of the embargo imposed by these two countries, of the one actually, of Sweden, on Turkey and how it was not safeguarded in the context of this negotiation.
Ms. Sakorafa, to be honest, Mikhail Gorbachev, in my view, is a controversial figure, and therefore, apart from the practical difficulty of the Greek Foreign Minister going to Moscow at this juncture, I cannot forget that aside from his contribution to the liberation of forces that were claiming an autonomous say and an autonomous national presence, he was the man who allowed, I say allowed, not to say ordered, the invasion of the Baltic countries.
Now, I come to the remarks on Ukraine and the visits to Kyiv. Mr. Loverdos is right. These visits have indeed been delayed.
And I would also like to ask that it be underlined because it should be underlined, and if you like, because it is in our interest and it should be underlined that the United States has also taken a clear position on this issue. I can submit the statements to you, but there’s no point for a Minister of the Greek Government in submitting statements by officials of another country.
As for the question of the Prime Minister’s embargo, which I believe was raised by Mr. Katrougalos again, I think the Prime Minister is being treated unfairly.
Mr. ……: (inaudible question)
I will say a few words about the Accession Protocols of Sweden and Finland brought to the Hellenic Parliament for ratification and then I will take a little time and the opportunity of our meeting to respond to some of the issues that you were kind enough to raise in the debate before the Committee, which as always was conducted in a climate of decency and dialogue, which I believe is extremely important.
By invading Ukraine, Russia is doing an injustice to itself and its contribution. However, Greece was also involved in another way. As Mayor of Odessa, a compatriot of mine -he originated from Corfu-  Grigorios Maraslis, saw to the construction of many of the buildings in the center of Odessa. We, therefore, have an important role to play in facilitating this effort.
With regard to the criticism leveled at us, and more specifically on the views of social democratic parties, we are not a social democratic party, so we do not need to apologize for the stance of social democrats in Europe; that is the job of other parties, in the opposition.
I believe that the country did everything it could as part of its original and, I reiterate, right choice not to engage in oriental bargaining.