In 1995, he established the UK Charity, the ‘Fetal Medicine Foundation’, through which:
Recently, under the auspices of the Ministry of Foreign Affairs, the establishment of Fetal Medicine / Prenatal Care Units in eight additional countries has been launched, within the framework of the Ministry's development aid (Hellenic Aid). These Units will be established in Albania, Armenia, Ethiopia, Kenya, Kosovo, Moldova, North Macedonia, and Rwanda, with 100% funding from the Fetal Medicine Foundation, and with very many activities to be organized in all these countries.
It is a great pleasure for me to be here in London tonight, to honor Kypros Nicolaides, Professor of Fetal Medicine at King’s s College. The Professor was born in Cyprus, in Paphos, and has rightfully acquired the title of the “Father of Fetal Medicine”. Every year, he performs hundreds of complex operations, saving numerous lives. He has authored thousands of articles and more than 30 books. Allow me to share a few points from the outstanding resume of his: In 1986, he was appointed Director of the UK’s first Fetal Medicine unit. He has been a Professor of Fetal Medicine at King's College since 1992.
I believe I am not exaggerating in the slightest when I say that Kypros Nicolaides honors the Hippocratic Oath through his medical practice and his extensive charity activity. And the Ambassador of Greece is not exaggerating when he says that hundreds of thousands, if not millions, of children all over the world, owe him their lives.
Furthermore, his activity has not been limited to what we define as the developed world. He has also financed the operation of embryonic medicine centers in developing countries such as Zimbabwe and Rwanda. He has granted scholarships to over 150 Greek doctors. He has also donated equipment to the Fetal Medicine Unit of Attikon Hospital. In recognition of his contribution, this Unit was renamed the Kypros Nicolaides Clinic in 2019.The Professor has been honored, with high distinctions, by the international scientific community for his outstanding work, worthy of all praise and recognition. In 2020, he was elected a member of the National Academy of Medicine of the United States of America. His homeland, Cyprus, has honored him with the Grand Cross of the Order of Archbishop Makarios III. In addition, he received the ARGO 2021 Science Prize, awarded to distinguished Greeks living abroad.● over £45 million has been allocated to projects in more than 50 countries worldwide,
● scholarships are awarded to train medical trainees in fetal medicine; and
● a World Congress on Fetal Medicine is held annually. 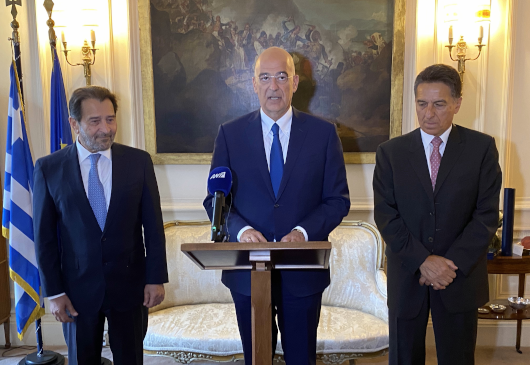 Mr. Ambassador of Greece to the United Kingdom,
My dear Professor,
Dear friends,
Dear Friends,
For all the reasons mentioned above, as well as many others that time does not permit me to mention, I have the distinct honor, on behalf of the H.E. President of the HellenicRepublic, to confer on him the Gold Cross of the Order of the Phoenix.